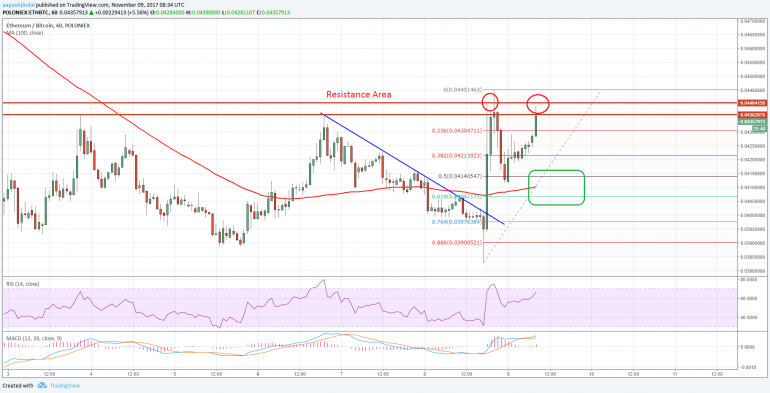 Ethereum price made a nice upside move from 0.038BTC against bitcoin. ETH/BTC is now eyeing an upside break above 0.045BTC.

There were multiple attempts by Ethereum price to break the 0.038BTC support against bitcoin. However, the price failed to decline further and as a result, an upside wave was initiated from the 0.038BTC low.

The price trade higher and moved above a couple of important resistance levels such as 0.040BTC and 0.042BTC. Moreover, there was a break above a key bearish trend line with resistance at 0.040BTC on the hourly chart of the ETH/BTC pair.

The pair is currently trading near another major resistance area near 0.045BTC. There is already a rejection from 0.0445BTC and buyers are once again attempting an upside break.

Should there be a break above the 0.045BTC resistance, ETH/BTC would gain momentum for further upsides toward the 0.048BTC and 0.050BTC levels.

On the downside, an initial support is near the 38.2% Fibonacci retracement level of the last wave from the 0.0382BTC low to 0.0445BTC high. It doesn’t seem like the price could decline substantially in the short term toward 0.040BTC.

An important support is near 0.041BTC, which is aligned with the 100 hourly simple moving average and the 50% Fibonacci retracement level of the last wave from the 0.0382BTC low to 0.0445BTC high.

As long as ETH/BTC is placed above the 0.040BTC support, there are possibilities of it gaining bids above the 0.045BTC resistance. The next major hurdle on the upside is at 0.050BTC, which is also a crucial pivot.