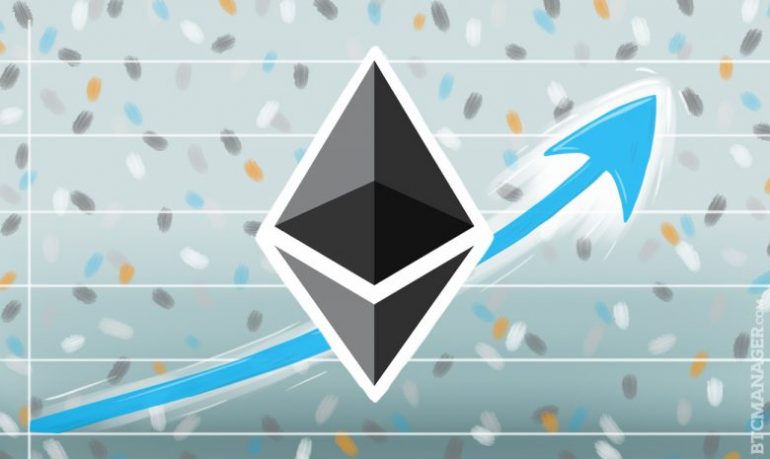 While most of the attention as usual has been focused on Bitcoin and the newly launched Chicago Exchange futures contracts, Ethereum has been pretty flat. That was until the Asian trading session this morning which saw the crypto asset surge to all-time highs.

Crypto mania resumed this week after some pretty wild chart swings over the weekend. Bitcoin gained and lost $5,000 within 48 hours and Litecoin made its best ascent to date, also reaching all-time highs today.

Ethereum has been more stable throughout all of these altcoin roll coaster rides, trading around the $450 level for the past three weeks. The rumble started around 23.00 UTC yesterday when ETH broke key resistance levels and headed upwards of $500 for the first time. It continued skywards to reach an all-time high of $553 according to Coinmarketcap.com before pulling slightly back to $546 where it currently trades at the time of writing.

Market capacity has increased to from $46 billion yesterday to $52.6 billion today, it continues to climb and secure Ethereum’s place as the number two crypto currency behind the big daddy Bitcoin. Over the past 24 hours trade volumes have exceeded $2.5 billion and Coinbase owned GDAX recorded the highest turnover with almost 11% of the total volume. Second exchange was Bitfinex with 9.7% of the total followed by Korean exchange Bithumb. The three exchanges combined have processed over $700 million in Ether since this time yesterday.

The CryptoKitties craze contributed to Ethereum’s previous flirt with $500 but it was unable to maintain those levels. The market took its time to recover from network congestion and all eyes were on Bitcoin as it jumped over 60% in a week.

Ethereum’s recent rally is likely to be a result of the network’s smart contract capability being utilized by Switzerland’s largest banks in preparation for new European financial regulations. Other news reports revealed that Barclays, Credit Suisse, KBC, SIX, Thomson Reuters, and UBS will seek to automate Markets in Financial Instruments Directive (MiFID) II requirements with the assistance from smart contracts on the Ethereum blockchain.

The initiative allows financial institutions to meet more stringent regulations on a common platform that will enable industry-wide reconciliation. At the time of writing Ethereum is up 18.5% in the last 24 hours, it has already broken key resistance levels and is likely to climb further.