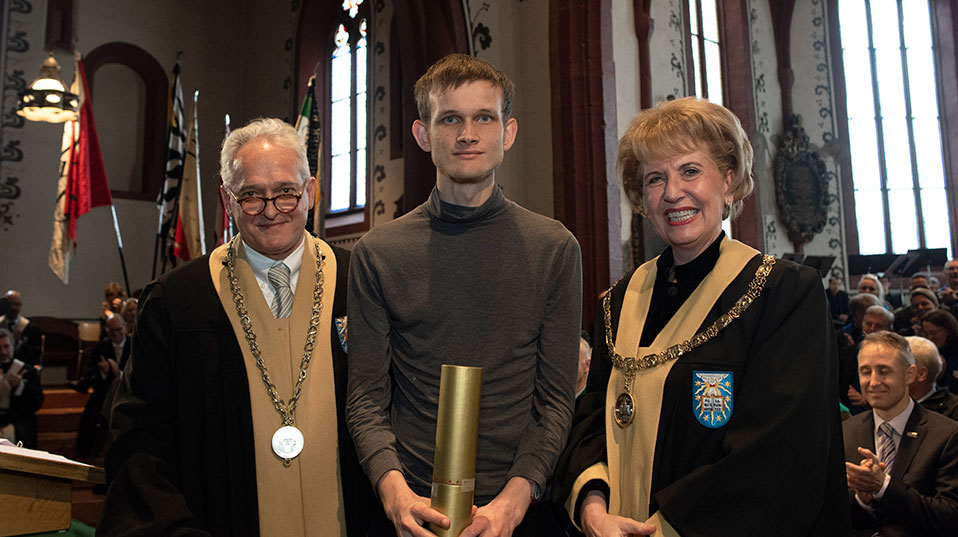 Yesterday, Friday 30th November 2018, the University of Basel held its 558th annual Dies Academicus ceremony. Founded in 1460, the University hosts this event to honor various deserving individuals for their contributions in academia and society. The recipients of this year’s awards were also made honorary doctors. Awardees during this year’s ceremony were as follows:

At only 24 years old, Vitalik Buterin, was awarded a honorary doctorate from the University’s Faculty of Business and Economics. According to the University of Basel, he received the honor for the following reasons.

[Vitalik Buterin] received the honor in recognition of his contribution to promoting decentralization and equal rights of participation in the digital revolution, as well as for his achievements in relation to cryptocurrencies, smart contracts, and institutional design.

The co-founder and inventor of “Ethereum” – a decentralized platform based on blockchain technology – authored his scientific publications without an academic degree or ties to a university.

Vitalik Dropped out To Pursue His Dreams

Of noteworthy mentioning is that in 2014 Vitalik dropped out from the University of Waterloo to pursue his dreams in technology. Before dropping out, Buterin received the two-year Thiel Fellowship that awards $100,000 to 20 promising innovators under 20 so they can pursue their inventions in lieu of a University education.

Born in Russia and raised in Toronto, Vitalik had this to say back in 2014 about dropping out.

It actually was scary. I was quite worried that if I stopped learning and following the same path, I would fall behind and not know certain essential things.

What are your thoughts on the co-founder of Ethereum, Vitalik Buterin, receiving a Honorary doctorate for his contributions to blockchain, cryptocurrencies and smart contracts? Please let us know in the comment section below.

[Photo courtesy of the University of Basel]