Is the European Economic and Social Committee Blocking Blockchain Adoption? 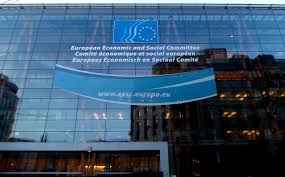 The European Economic and Social Committee (EESC), a consultative body of the European Union, maybe cleverly blocking blockchain adoption as per a recent report.

According to observers, the EESC is both bullish and bearish of blockchain-based products such as cryptocurrencies. On the positive side, an EESC member noted that blockchain technology could not be wished away.

For example, Giuseppe Guerini, a member of EESC, said that the technology could be compared to the early printing press.

“The first book to be printed was the Bible. Now, imagine if people had equated the printing press with a means capable of printing only Bibles. That would have been inaccurate because printing technology revolutionized life in Europe.”

Further, the report outlined possible areas that blockchain could bring a revolution. In the list, for example, EESC included tracing fundraising and donations and enhancing the governance of social economy organizations. Blockchain can be applied in authenticating activities, certificating skills, ensuring secure e-care system and tracing agricultural products.

Blockchain Is Prone To “Speculation and Hoarding”

Unfortunately, the European Economic and Social Committee have some reservations. The group fears that blockchain is “subject to speculation and hoarding” by a few individuals.

Surprisingly, EESC is ready to hinder the adoption of blockchain due to its effects that don’t favor the traditional finance.

In addition, the report noted that its borderless nature requires supervision from regulators in the European Union so that they can “coordinate efforts.” That’s besides, “the large investments required a call for coordinated, structured, European action.”

Additionally, the European Economic Social Committee suggested that public measures must be adopted to aid in its development plus the “involvement of civil society is imperative.”

What of the “Elites”?

As it would be expected, cryptocurrency enthusiasts fired back with rage. On social media platforms, the enthusiasts noted that the traditional finance system has already created elites. Consequently, the elites have “already excluded others from the economy and the market with accredited investor requirements, and large banks are canceling customer accounts for transferring to exchanges, or any other roadblock.”

“So, what is their (EESC) preferred outcome? Turn the crypto economy into a communist sh** hole where we’re all equal because we all get 80 bucks a month to live on? Or just a bigger ‘better’ version of what we have now, where the top 2 percent own an enormous slice of the pie? They don’t want to give their power/relevance.”

In April 2018, EU countries jointly formed the European Blockchain Partnership (EBP). Consequently, the EBP would help the countries to “cooperate in the establishment of European Blockchain Infrastructure (EBSI) that will support the delivery of cross-border digital public services, with the highest standards of security and privacy.”