There is no doubt that blockchain is a technology that has been disrupting the world over the last decade as it came into existence like the weirdest thing we could ever have with series of inventions and developments around the crypto verse.  Amongst the altcoins in the crypto verse disrupting the financial world with its well defined and crafted recipe is Monero. It is regarded a fast, private, and secured decentralized cryptocurrency that “confirms transaction by distributed consensus and immutably record on the blockchain”.

On April 6, 2018, in an attempt to guard against ASIC miners, the cryptocurrency was hard forked. While the newly forked Monero, which lead to the creation of four different project, was forked into version 12 of its protocol, and the four new project, are still on version 11 of the altcoin’s protocol.

The action has been tagged to be in similitude to Ethereum and Ethereum Classic forks where both are forked differently. Albeit the four new platforms are using the same protocol, network and coin, but they use different names and logo.

The new projects are Monero Classic, Monero Zero, Monero Original and the fourth, which is also referred to as Monero-Classic. 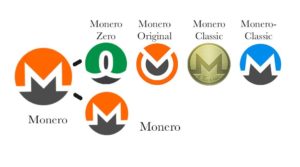 The first project is Monero classic, initiated by a group based in Singapore called “Monero enthusiasts” and some developers. Speaking to Bitcoin Magazine, a representative of the group, Bento Tan said the “development of ASICs is a healthy” one. He added that they believe that hard forking is a bigger risk than mining centralization.

“The main message of Monero Classic is that we believe that the developers changing the proof of work creates more centralization and harms decentralization.” And: “The M[o]nero developers are saying that they can and will change the consensus rules whenever it suits them and the community seems to be conditioned into following the wishes of the developers.”

Tin then said Monero classic is contrary to the hard fork, and has no connection with the other new projects.

The second project, Monero-Classic was initiated by “an early Bitcoin evangelist and blockchain eco builder” known as PZ. Just like others, Monero-Classic remains on version 11.

PZ aired that “the emergence of specialized mining machine[s] for a cryptocurrency is [a] normal market economy phenomenon,” and “if there are professional mining machines, the events like ‘Monero was attacked by more than 500,000 botnets’ could be avoided.”

A fraternity known as ‘concerned users’ formed the project Monero 0. The group stated on their website that: “We’ve decided that the Monero Project’s strategy to continuously hard fork is no longer a stable or a sane strategy. We believe that Satoshi’s Proof of Work is the only mechanism for decentralized consensus. The so-called ‘network upgrades’ that are centrally mandated by the Monero Project are a Trojan Horse designed to compromise the effectiveness of Proof of Work in the Monero network. Monero 0 is not a fork; it is the original Monero.”

Of the four new forked projects, Monero Original has less known information. It is, however, available on GitHub. The developer behind Monero Original, in a press release stated that:

“Monero has always been about freedom of choice, about diversity and about the strong community behind it. We are providing the Monero fans [with] a possibility to support the iconic coin and stay on the original chain. Monero Original team stands for diversity, which is a logical marker of evolution. We are excited to see our favourite coin mature, and we are even more excited to help [in] keeping this diversity. ”

Interestingly for XMO project, it has gotten support from a number of markets, amongst which is HitBTC, a famous exchange platform from an unknown location operated by Hit Techs Limited.