Predictions from respected corners of the mainstream financial world – GP Bullhound and Saxo Bank – could be good news for the crypto industry and its status as a valid and profitable asset class.

US advisory and investment firm, GP Bullhound (GPB), under the subhead “Cryptocurrency will Grow Up”, concurs with the balance of opinion among analysts covering crypto, that institutional money will lead the recovery.

“We are yet to see the best of cryptocurrencies. Blockchain activity is picking up with even traditional financial institutions ensuring they do not get left behind. 2019 should be the year institutional capital flows into cryptocurrency, with previous obstructions and tight regulations lifted,”

Last year the tech-focused investment firm correctly foresaw the crypto implosion, which in hindsight some might say was not too difficult to predict. It did, however, put a number on its premonition, arguing that a 90% correction would take place, although it has been surprised by the speed of the collapse.

Nine out of 10 of its 2018 predictions have proven to be correct, so its 2019 crypto recovery prediction should not be dismissed as just more hot air from investment firms trying to protect their investments.

And for institutions, it’s not just the attraction of the financial gains of buying coins at the bottom (wherever and whenever that might be), but investment in distributed ledger tech more broadly:

“We predict 2019 will be the year of institutional capital inflow into blockchain, which will not be solely financially motivated, but backed by increasing demand we see on the corporate and family office side and their desire to build positions. Initially this will happen through funds, equity investing into blockchain technology projects as well as financial instruments and derivative products related to major cryptocurrencies.” 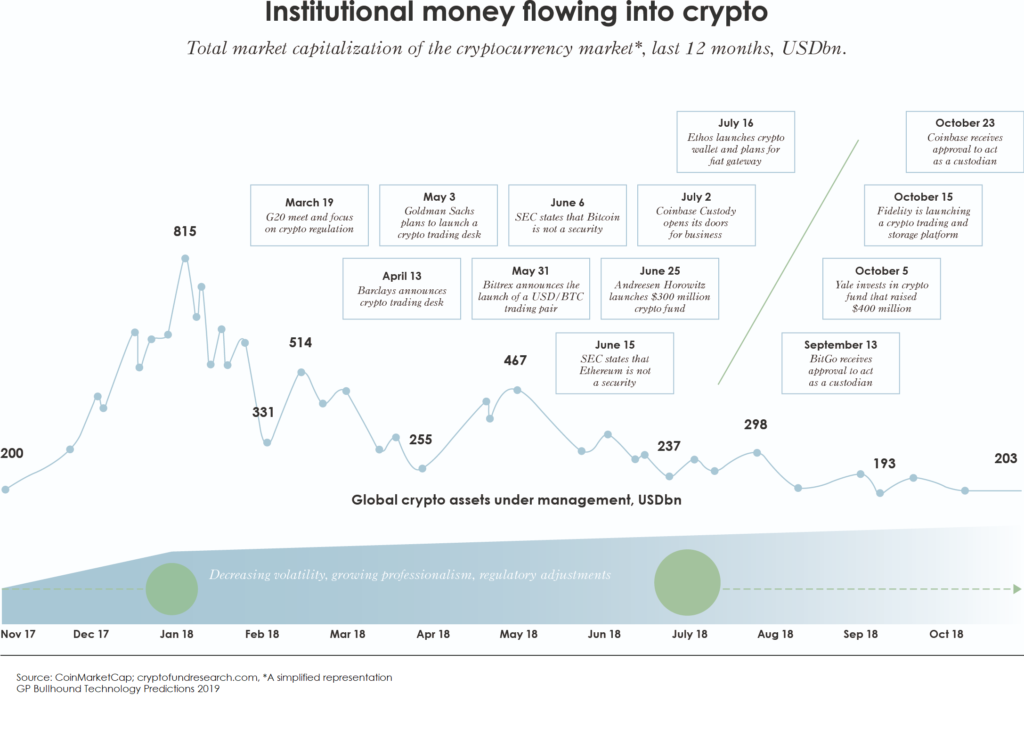 Intercontinental Exchange’s Bakkt platform is likely to be one of the critical on-ramps for “institutional capital inflow”, as too might be the small number of regulated instruments that currently exist.

These include the Bitcoin Investment Trust from Barry Silbert’s Grayscale Investments (although it trades at a premium to its net asset value which would be off-putting); the exchange traded notes (these are debt instruments, not ETFs) provided by CoinShares’ XBT Provider Bitcoin and Ethereum tracker products and newer offerings such as the Amun Crypto Market Basket Index ETP, which recently launched the first regulated crypto index fund in Europe on the Swiss main market.

Amun’s product currently has the second-highest turnover of all exchange traded products on the Swiss market.

Add to that the growing interest in security token offerings (STOs) that EWN reported on in November, and the entry routes are coming into view, and GPB agrees:

However, as GPB underlines, institutional entry still faces the issues around regulatory clarity, liquidity and custody.

Nevertheless, Olga Feldmeier, chief executive of Smart Valor, which is building a security token platform, commenting on GP Bullhound’s bullish stance, noted: “Cryptocurrencies will continue to innovate beyond the well-known bitcoin and Ethereum, and we will see many more coin and payment products emerging. All that will clear the way for mass adoption, which we will see in the second half of 2019.”

GP Bullhound’s ones to watch

The year blockchain gets out of the labs

For those that were starting to lose faith in blockchain tech ever emerging from the fintech labs of the many financial institutions running pilots, GPB confirms that many are still on track to emerge into the wild, as corporate FOMO asserts itself.

“Underneath the surface, activity in Distributed Ledger Technology (“DLT”) is in full speed, even within financial institutions.”

One financial adoption story (it’s not all about Ripple, which doesn’t get a mention from GPB) that hasn’t had much coverage was the announcement from Calastone that it will be moving its global fund transaction business on to blockchain. That will have the effect of reducing costs for mutual fund investors, assuming the savings are passed on by fund giants such as Vanguard, BlackRock and Fidelity.

Calastone is no small fry – it has trading volumes valued at $80 billion per month, with 1,300 institutions part of its network in 34 markets around the world.

Julien Hammerson, Calastone’s chief executive, remarked in the company’s press release: “In making this first step using blockchain, we are providing our customers with the requisite tools they need, to be future-ready.”

The other prediction with crypto implications – from Saxo Bank – has been passed over by both the crypto and mainstream financial media.

Earlier this month Saxo Bank released its annual “10 outrageous Predictions” and it has to be said that this year they don’t sound too outrageous given the times we live in.

Among 2019’s 10 predictions are a recession in Germany and the sacking of the chair of the US Federal Reserve Jerome Powell by president Trump – neither of which are probably too far off the mark.

However, it is its fifth prediction that should interest cryptowatchers.

That would represent a dramatic reversal of leadership in the equity markets, as traditional value stocks (but not GE) with healthy cash flows and reliable and growing dividend payments replace growth companies such as the FAANG stocks of the tech sector.

GE, once the bellwether of the US economy and its most valuable company, is struggling. Saxo predicts the rollover of its $100 billion in liabilities freaking out the credit market “pushing the credit default price above 600 basis points”.

“The carnage even spreads as far as Netflix where investors suddenly fret the firm’s fearsome leverage, with a net debt to EBIDTA after CAPEX ratio of 3.4 and over $10bn in debt on the balance sheet. Netflix’s funding costs double, slamming the brakes on content growth and gutting the share price.”

Why should any of that matter for crypto?

Credit is the oil that keeps the machine working. Credit is fundamental to how not just the financial but the entire economic system works, allowing firms such as Netflix and Tesla to build their businesses despite the absence of profits, with lenders banking on their return on capital down the line when products come to market and the cash starts to flow.

But if the credit market’s breakdown, that’s a huge problem for the credibility of the financial system.

It is brought into even starker perspective by the latest IMF data for global private and public debt, which it estimates at $184 trillion in 2017. That works out at $86,000 for every person on the planet.

Or if you prefer to use the equation of exchange approach to bitcoin valuation, assuming debt acts as a form of money creation, you could divide that debt pile by 21,000,000 to give you a price of $8,761,904 for bitcoin.

So, the next time someone (Nouriel Roubini perchance or economist Kenneth Rogoff who says buying crypto is a lottery) tells you that crypto is in a bubble (true, but perhaps near full deflation) and is intrinsically worthless (false, because it transacts value and stores it, no matter how inefficiently), remind them about the mountain of debt that keeps the current system afloat and artificially inflates asset values.

It is true that those massive debt liabilities are meant to be balanced by assets – in a balance sheet. But in the real world, those “assets” may not be worth the paper they are written on.

The divergence of debt from its asset mooring does not exactly encourage trust in the monetary forms that give it expression.

Chief economist at Saxo, Steen Jakobsen puts it this way:

“This year’s edition [of its outrageous predictions] has a unifying theme of ‘enough is enough’. A world running on empty will have to wake up and start creating reforms, not because it wants to but because it has to. The signs are everywhere.”

“We think 2019 will mark a profound pivot away from this mentality as we are reaching the end of the road in piling on new debt and next year will see us all beginning to pay the piper for our errant ways.”

Sgt Barnes in the modern movie classic Platoon puts it more succinctly: “When the machine breaks down, we break down”.

Just as the Great Recession led to the invention of bitcoin, the breakdown of the credit cycle could be the backdrop to the next act in the long game of crypto adoption.

Even the fiat-loving skeptics may be forced to consider what was once the unthinkable.