Bancor, a decentralized cryptocurrency exchange project has become the latest victim of cryptocurrency hackers. The company announced on Monday (July 9, 2018) that it experienced a security breach forcing it to shut down its operations. Bancor was one of the high profile ICOs of 2017, raking in $153 million during its token sale event.

Details of the Hack

Issues began yesterday when the platform announced a security breach. A few hours later, Bancor released a follow-up statement revealing that suspected hackers had stolen $12.5 million in ETH. The hackers also took BNT and NPXS tokens to the combined tune of $11m making the total loss to be $23.5 million.

According to the Bancor, the breach came via an online wallet being used to effect upgrades to certain smart contracts. The hackers were able to gain control of the wallet using it to siphon the stolen coins.

Effect on the Bancor Cryptocurrency Price

Since the news of the hack became public, BNT token price has taken a significant tumble. At the start of yesterday’s trading, the BNT price was $3.15. By the end of the day, the price fell to $2.50. The decline has continued into its second day, today (July 10, 2018), dropping to $2.45. BNT has lost more than 20 percent since the attack. 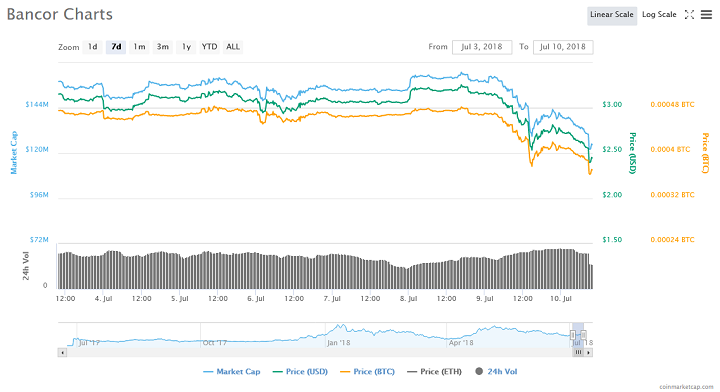 The theft is yet another snag in the Bancor project development roadmap. Despite its fundamental premise and the successful ICO, the project has many doubters. Bancor is a decentralized exchange platform that employs a fluctuating price system for selling virtual coins even when there is no demand.

In 2017, Kyle Samani of Multicoin Capital said that Bancor didn’t provide any utility for the market. According to him, if exchanges decline to list any token, it is because that token isn’t good enough. He summarized his critique of the Bancor project thus:

For assets that actually have value, there will be a market. For assets that people don’t want to buy. Why should there be some pity-based programmatic market maker to provide liquidity? My inner capitalist is just dumbfounded by the concept of Bancor.

Will this latest hack adversely affect the prices of cryptocurrencies, especially Ether? Does this hack show that decentralized exchanges are just as vulnerable as their centralized counterparts? Keep the conversation going in the comment section below.