IOTA Foundation Announces Ecosystem Platform and its Price Rockets Away

Clearly, the days of all-red are going away and appearing very rarely as a welcoming mid-week trading has taken over the market of cryptocurrencies. One of the top leading coins is standing high above others in gain for the last 24-hours as it rockets with 16.50 percent in the green – IOTA. 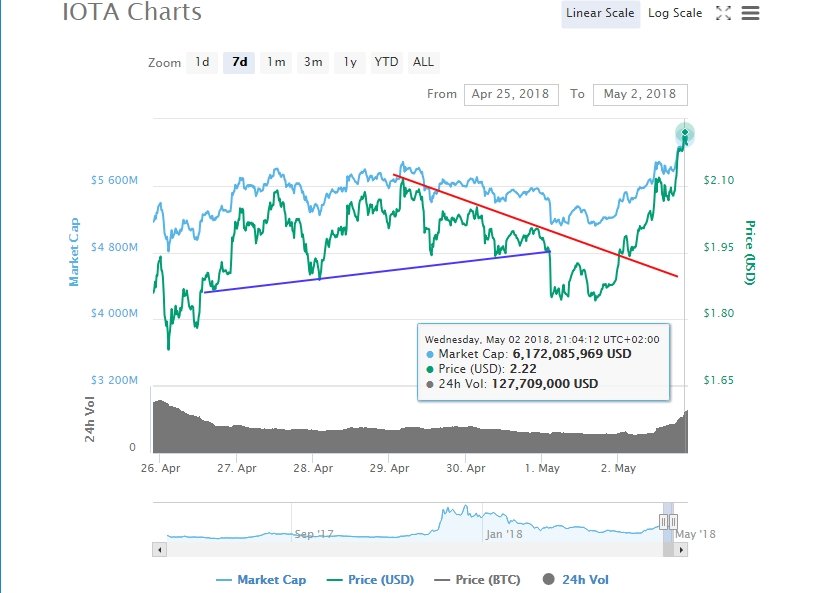 Recently, there were many attempts by the pair MIOTA/USD to overcome the $2.10 or at least close successfully above $2.00 but with no success which eventually ended on the first day of May with a speedy dip. However, as fast as the price dropped, it climbed its way above and clear the important resistance at $2.00 opening gates for more gain in the upcoming days hopefully forming a higher trading ground.

A very strong and confidence filling-up community with a very large share of trading happening on Bitfinex and Binance supports the project of IOTA. The IOTA Foundation, the Berlin-based company behind IOTA technology, announced the launch of IOTA ecosystem platform, on Twitter account on Wednesday morning.

“With a global community of developers, entrepreneurs, corporate executives, government officials, philanthropists, hobbyists, and general enthusiasts contributing to the IOTA project, the IOTA Ecosystem is a platform for this community to meet, collaborate, learn, inspire, develop and build.”

Targeting to unite the community, the new website will attempt to encourage and stimulate further development of the project.

Tangle is the data structure behind a new and novel micro-transaction cryptotoken optimized for the Internet-of-Things (IoT) called, appropriately enough, “IOTA.’ Very different from complex blockchains that are dealing with their era-issues, Tangle was designed to reach the level and the size of the Internet-of-Things ecosystem with tens of billions of devices connected to each other which was required to be supported by the system.

The number of connected devices that will permeate our modern landscape in the coming decade is estimated to be 50 billion(!) Each of these are designed to make the world a better and more seamless place for us. Tied to this fantastic promise are of course a ton of obstacles to be overcome, of which one major one is micro-transactions. These connected IoT devices must be able to automatically pay miniscule amounts to one another in a frictionless manner without having to compromise on product design by introducing additional hardware. This is why IOTA was conceived.

For the system to function properly, there is no need for miners to complete transactions as the network is planned in that way that every time a new transaction is issued, it is confirmed by the next one as the present one confirms two prior itself being requested. The more users, the better the system-network with no problem of overpopulation.

When it comes to Real-Life use, just recently ElaadNL joined up with IOTA to release the first charging station where paying and charging can be done with IOTA.