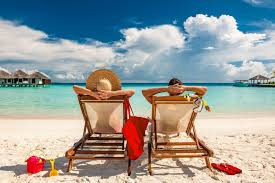 Is Bitcoin (BTC) Down Because of Summer Vacations and the FIFA World Cup in Russia?

During one of the conversations in the numerous cryptocurrency chat groups on Telegram, a keen observer of trends pointed out that Bitcoin (BTC) and the crypto-markets are relatively week during the Summer months of the Northern hemisphere. According to National Geographic, summer in the Northern Hemisphere occurs every year from 1st June to August 31st.

He continued to point out that many Americans and Europeans are probably travelling and some are even in Russia to witness history at the World Cup that started on the June 14th to July 15th. The FIFA World Cup is held in the summer months once every four years. The previous tournament in Brazil (2014) was estimated to have welcomed over 6 million tourists in that year alone. The country of Russia has estimated close to 2 Million visitors during the tournament alone (14th June to 15th July).

It is with these two events – Summer, 2018 and the FIFA World Cup – that it is possible to have a theory that the lack of volume in the cryptocurrency markets, is due to individuals around the world enjoying the accompanying activities related to these two events. This means a lot of spending through travelling, eating out and generally having a good time. There were plenty of savvy crypto traders who made massive gains in the last bull run of 2017. They could be enjoying their profits at a beach somewhere before deciding to return to trading in September.

Looking at last year’s price chart for Bitcoin during the summer months, yields a similar observation of a stagnant Bitcoin price up until mid August. What then proceeded during that time period, was the amazing bull run we had in November, December and to some extent, January 2018.

In conclusion, the summer spending habits of individuals in the Northern Hemisphere during this time period could be a factor as to why the current price of Bitcoin has stagnated from late May. BTC ended that month at a value of $7,140 which is not too far off from current levels of $6,587. Perhaps when the summer and the FIFA world cup are over, we will see more funds buying into the crypto markets and a possible bull run into the Holiday season.