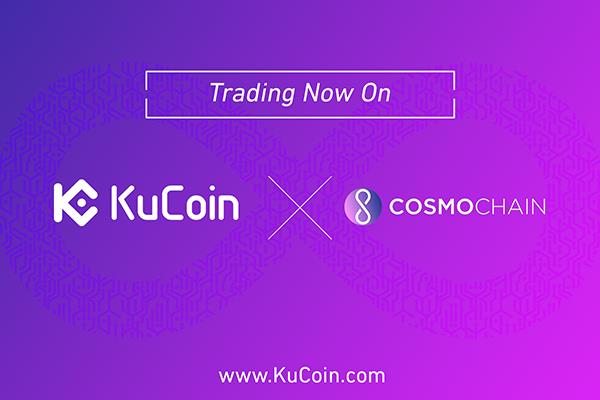 KuCoin announced that Cosmochain (COSM) is listed on their platform. It is now accessible for trading with supported pairs such as COSM/BTC and COSM/ETH. Traders can utilize KuCoin’s official apps and their website at www.kucoin.com.

Cosmochain is a complementary Company-to-Consumer platform that unites cosmetics product users and content producers to cosmetics product suppliers, comprising cosmetics companies, OEM/ODM manufacturers, R&D centers, and distributors. In this platform, the Cosmochain Team endeavors to solve the needs mentioned above of both companies and customers. All information collected from platform sharers are stored confidentially in this customer-centered ecosystem. Those who share their limited time and attention toward producing and curating contents for others are paid with tokens and receive pro-rata ownership of the contents they produce. On the other hand, cosmetics product suppliers can actualize a wide kind of “on-demand” services on the platform by using API that Cosmochain produces.

Two distinct tokens and one internal virtual index make up the Cosmochain ecosystem:

– The first token is an externally exchanged token named Cosmo Coin. The second token, as well as an index of participation to the platform, is Cosmo Power, which can be utilized to make payment within the platform and given out as rewards for activities.

– The one virtual index is called Cosmo Level. Cosmo Level, a reputation index, is created to prevent misuse of power within the platform and can only be acquired by actual activities and contribution. Having been specified separate roles within the Cosmochain platform, these three entities construct a healthy ecosystem