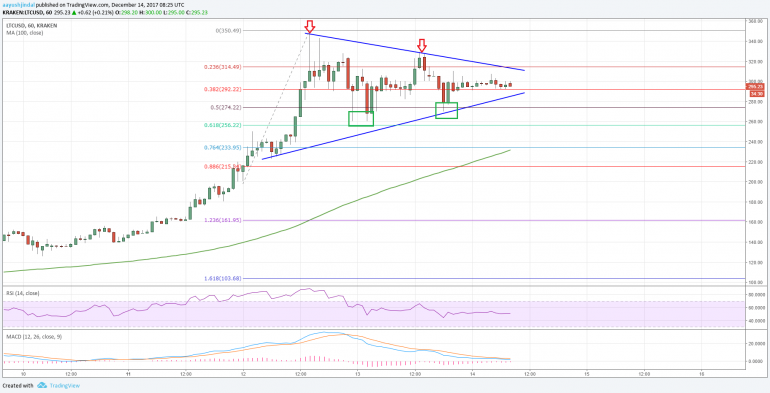 Litecoin price has started a correction from $350 against the US Dollar. LTC/USD is currently trading in a range and is preparing for the next move.

Recently, we saw a major upside move in litecoin price above the $300 level against the US Dollar. The LTC/USD pair traded as high as $350.49 before it faced sellers. Later, the pair started a downside correction and moved below the $300 handle.

Moreover, the 50% fib retracement level of the last wave from the $199 low to $350 high held the ground and prevented any major downsides. Currently, it seems like there is a short-term contracting triangle forming with current resistance at $320.00 on the hourly chart of LTC/USD.

The pair is trading in a range above the $280 support and below the $320 resistance. Sooner or later, the pair might make the next move and trade either above $320 or below $280.

The current price action is positive, but the price has to stay above the $280 and $260 supports levels. Should buyers fail to protect declines below $260, there could be a test of the $200 handle in the near term.

On the other hand, if LTC/USD continues to stay above the $280 support, it will most likely break the triangle resistance at $320 and make the next move. Above the mentioned $320 resistance, the price could test the recent high of $350 and might even break it.