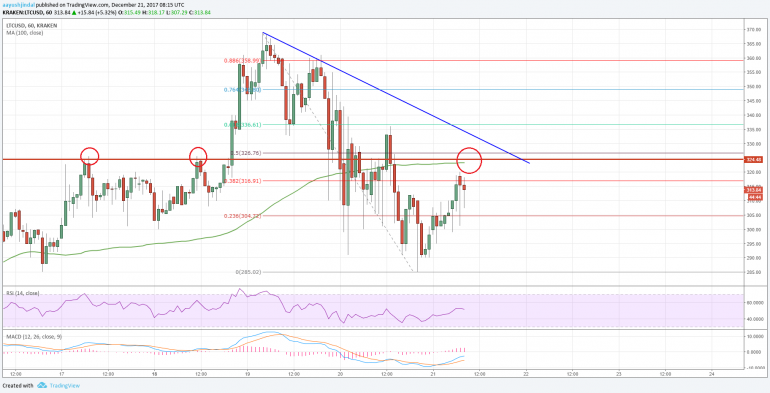 Litecoin price declined recently toward $285 against the US Dollar. LTC/USD is currently recovering, but it is facing a major resistance near $325-330.

Yesterday, we saw the start of a downside correction from $368 in litecoin price against the US Dollar. The LTC/USD pair moved below the $300 support and even closed below the 100 hourly simple moving average.

More importantly, there is a major bearish trend line forming with resistance at $330 on the hourly chart of LTC/USD. It seems like the pair might continue to move higher, but it will most likely struggle around the $325 and $330 resistance levels.

Both the mentioned levels are significant along the 100 hourly SMA for uptrend resumption above $340. A successful close above $330 and $340 could push the price back in the bullish path toward the $360 and $380 levels.

On the downside, the $300 level holds the key for litecoin price. If sellers push the price below $300, there is a chance of LTC/USD moving back toward $280. The hourly RSI is signaling positive signs above $310, but it points lack of momentum.