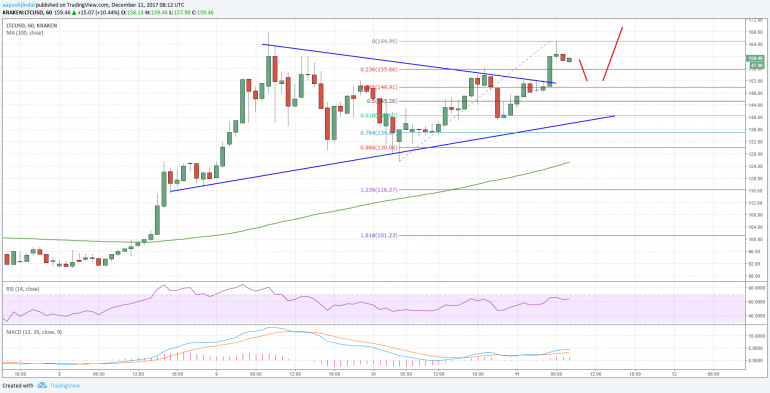 Litecoin price broke the $104 resistance to surge above $150 against the US Dollar. LTC/USD is super bullish and is eyeing more upsides.

There were heavy gains during the past three days in litecoin price above $100 against the US Dollar. The LTC/USD pair was able to break the $104.00 resistance (as highlighted in the previous post), which opened the doors for more gains.

The upside move was very strong since the price was able to move higher by more than $50 and traded as high as $168. Later, a downside correction was initiated towards $125-130.

The pair recently corrected towards $125, found buyers and started a fresh upside move. During the upside move, there was a break above a contracting triangle with resistance at $152 on the hourly chart of LTC/USD.

Therefore, the $140-150 support zone is a major buy area. Should the price dips from the current levels, buyers will most likely protect declines below $140.

On the upside, the $165 resistance is an immediate hurdle for buyers. Above $165, the next major resistance is at $168-170. The overall market sentiment is bullish as long as litecoin price is above the $140 pivot.