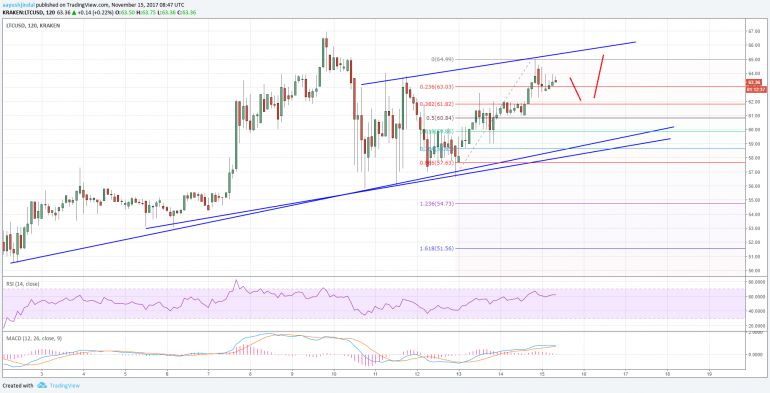 Litecoin price remains in an uptrend above the $60.00 level against the US Dollar. LTC/USD might continue to grind higher toward $68.00 or even $70.00.

There was a decent uptrend initiated from the $57.00 swing low in Litecoin price against the US Dollar. The LTC/USD pair traded higher and broke a couple of important resistance levels such as $60.00 and $62.00.

It recently traded as high as $64.99 where it faced a connecting resistance trend line. At present, the pair is correcting lower and already tested the 23.6% Fib retracement level of the last wave from $56.95 low to $64.99 high.

The current uptrend remains intact as long as the pair is above the $60.00 handle. There are two important bullish trend lines forming with support near $60.00 on the 2-hour chart of LTC/USD (Data feed via Kraken).

Should there be a break below $60.00, the price could decline further and trade toward the last swing low of $57.00.

Therefore, it’s best to keep an eye on the highlighted trend lines and the $60.00 handle for buying opportunity with a tight stop. The 2-hour RSI for LTC/USD is around 62 and signaling a bullish bias.