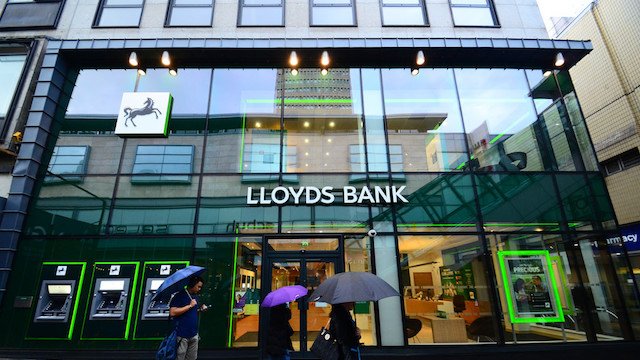 British financial institution Lloyds Banking Group has reportedly banned its customers from purchasing bitcoin and other cryptocurrencies on their credit cards.

According to a report from the BBC, the decision from Lloyds won’t impact debit card holders, but only applies to the banking group’s eight million credit card holders across its subsidiaries, taking effect the 5th February.

Lloyds is concerned that it could end up paying a hefty bill for unpaid debts should the crypto market continue to fall in price. Monday morning trading has already seen the price of bitcoin fall below $8,000 again despite a stable weekend, signalling a two-and-a-half month low for the digital currency. It’s currently trading at $7,741, according to CoinMarketCap, representing a 11.30 percent drop in 24 hours.

The bank said that customers would not be informed via email or post of the change to the bank’s credit card policy. They would only be informed of the new change should they query a blocked digital currency card transaction.

Lloyds Banking Group joins the likes of the Bank of America and JPMorgan Chase who have also banned their customers from purchasing bitcoin and other digital currencies.

The move follows warnings from China, India, and South Korea about the risk of trading in digital currencies such as bitcoin. New reports from China suggest that it is planning to block all websites linked to cryptocurrency trading and initial coin offerings (ICOs), even those of foreign platforms, in a bid to stamp out the market.

In a report from the South China Morning Post, an article published in the Financial News, a publication affiliated to the People’s Bank of China (PBOC), noted:

“To prevent financial risks, China will step up measures to remove any onshore or offshore platforms related to virtual currency trading or ICOs.”

After the closure of domestic digital currency trading in China, many turned to overseas platforms to continue investing in the market. As such the article added that ‘risks are still there’ and that it will ‘tightening regulations.’

Last week, India’s finance minister, Arun Jaitley, said in his budget speech that the government doesn’t consider cryptocurrencies as legal tender and that it would ‘take all measures to eliminate use of these crypto-assets in financing illegitimate activities or as part of the payment system.’

News of increasing regulatory pressure is playing havoc with market prices, with the combined market cap valued at $365.7 billion. This represents a more than 50 percent drop from January’s all-time high of $830 billion.