John McAfee makes another of his famous predictions, this time adventuring on a one-month time analysis for several events, including the behavior of various cryptocurrencies.

In a tweet published on May 24, he mentioned that although his specialty is long-term predictions, this was a special occasion:

My short term price predictions: in a major dip, with nearly everything dropping, the price of Docademic doubled since my prediction. The market will turn before June 12th and my predictions will hit. My algorithms predicted Trump's June 12th date. They have never been wrong. pic.twitter.com/IGAzWPtOV4

Previously, McAfee became famous in the world of cryptocurrency for ensuring that by 2020 the price of BTC would reach one million dollars.

John McAfee is also known in the world of blockchain as an important influencer and heavy supporter of global adoption of cryptomoney.

Such is his reputation within the community that despite charging $105,000 per tweet to talk about a crypto, customers have not ceased and his followers remain attentive to their comments.

It is also important to note that many of the cryptos that he promotes have gone on a bullish spree, confirming his predictions.

In fact, according to his own statements, McAfee uses a number of algorithms that have not been wrong to date, so he remains confident that the results will be consistent with what was disclosed.

John McAfee remains bullish on bitcoin in the short term, his 15k prediction for the end of the month seems to go against some technical indicators.

Other notable predictions point towards a growth of more than 300% in some important altcoins like Golem and Eos, as well as a similar growth in other cryptos with a lower market cap like Bitcoin private, Docademic and Bezop.

Another of the controversial predictions he presented included President Trump’s agenda of meetings in Asia, with dates for diplomatic activities with North Korea and the creation of a Gold-Backed US currency with Japan.

Mr. McAfee has decided to become an active participant in the privacy advocacy community. As an influential technologist, he has always found this topic particularly interesting.

On May 24, he posted a Twitter poll asking his followers whether they wanted him to lead a privacy-oriented movement. 70% said yes

I have been asked by many of the 52,000+ supporters of BTCP to lead a crypticurrency privacy movement. Is this what my followers want?

The future initiatives of Mr. McAfee are unknown. However, he opened a website where users can sign a currency independence statement on the blockchain:

For privacy to exist, we must have freedom of choice. We do not have that in cryptocurrency. We have written the founding document of the Crypto movemen: The Declaration Of Currency Independence. Please, read it and sign it on the Blockchain. A first:https://t.co/44iJPzrO0Q

According to some websites that project the mathematical behavior of McAfee’s 2020 prediction, a 15k value by late June is even more ambitious than the expected target needed for reaching the million dollars with sustained growth. 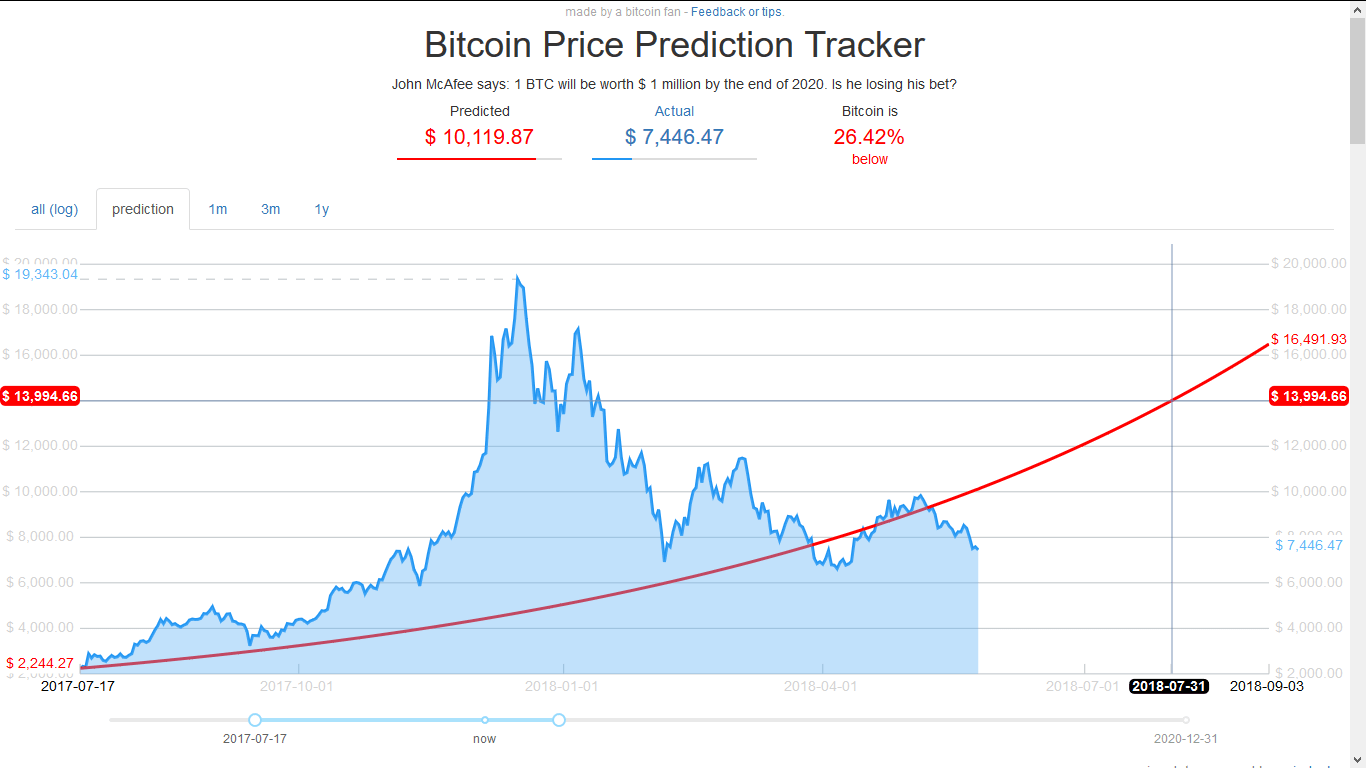 However, It is interesting to note that the line of the McAfee prediction has been most of the time lower than the actual prices, and in many ocassions it has served as an important support for prices