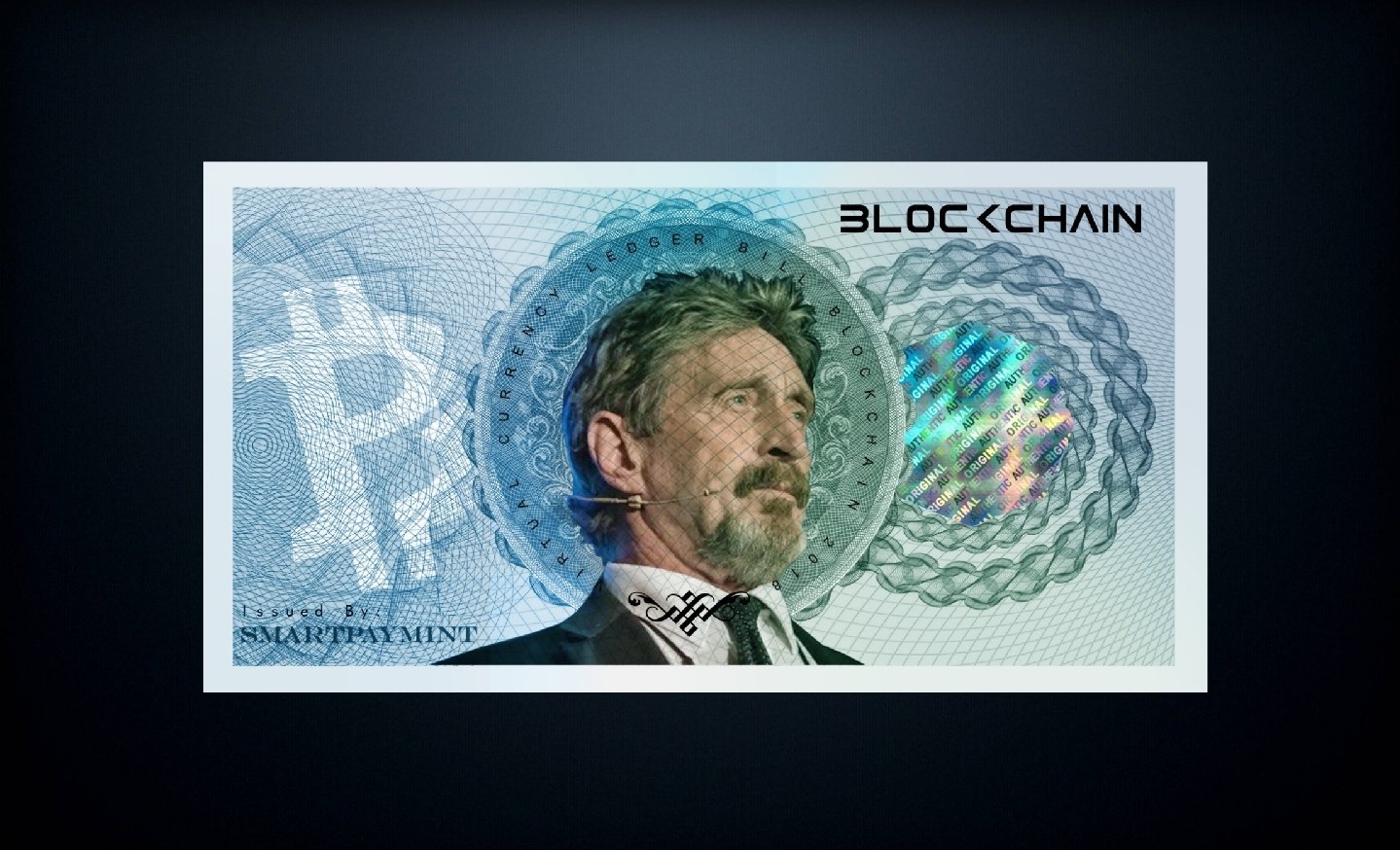 The “IMO” is scheduled for June 25th, according to a tweet published by John McAfee himself confirming that the McAfee Redemption Unit (MRU) issuance was not a hoax.

No hoax. The "McAfee Redemption Unit" is real and coming in 26 days. The graphic is low res – don't want to give much away yet. Printed on currency paper, holographs on both sides, serialized, linked to the blockchain, redeemable, convertible, collectiblehttps://t.co/ySUwkDuW7s pic.twitter.com/75xTje39X8

The news first appeared on a Hindi website, suggesting the possibility that the story was a hoax, but John McAfee quickly clarified his intentions not only via twitter but through direct contact with the website team.

Previously John McAfee had commented on his intentions to issue a FIAT currency, after mentioning the coincidence that an user had sent him a design for a FIAT bill without knowing he was actually planning something similar.

. @SmartPayMINT sent this. What's odd is that tomorrow night I am going to make an announcement of the new "McAfee Coin", based on a radical new concept: Fiat currencies (collectible) backed by crypto – the reverse of what banks are attempting. Seriously. pic.twitter.com/3uTHHKG18M

According to the famous influencer, McAfee Redemption Unit (MRU) will be the token that will support the FIAT money: The McAfee Promissory Note. The intrinsic value of such a coin will be an amount of time to share with him in a personal meeting.

According to Crypto-News, McAfee has at least an elaborate preliminary idea of what his FIAT currency and its support for Crypto would look like, as evidenced by his statements:

“Each McAfee promissory note is denomination and serial number unique and each note is tied to one or more cryptocurrency coins called “McAfee Redemption Units” (MRUs). A coin identifier or list of coin identifiers is distributed with the note as a separate, collectible document – a paper wallet. It is expected that this paper wallet will be stored in a separate location from the note. None of the coins are initially “activated” however. Coins become activated if and when a note holder chooses to “convert” his or her Fiat note through a process of reverting the note(s), through the mail or other means, to the MRU Foundation – the organization responsible for archiving and caring for the physical notes. There may be a processing fee for conversion.”

According to the website, the value of each McAfee Redemption Unit (MRU) is initially on the order of $9.95. Every MRU holder may convert the Fiat to crypto by sending the McAfee Promissory Notes to the MRU Foundation or they can choose to redeem it, which would give them some time to spend with Mr. McAfee:

“Redemption is purposely made very expensive. My followers are hugely loyal, and I feel certain that many will go through the time and huge expense for the opportunity to spend private time with me. See what this might do to the fundamental value of each redemption unit. If the value of a unit is based even remotely on the cost of redemption, which people are willing to pay, then the notes will immediately skyrocket. But the big key is in the way I have structured the auction sites. Cannot tell you more now.”

The idea of tokenizing time, although innovative, had already been proposed by another entrepreneur: Boris Akimov, the founder of Russian organic foods retailer LavkaLavka:

“It’s a simple idea in principle … I have certain skills, knowledge and experience, as well as my time … and that is what will be tokenized”

This is not entirely crazy for some economists who have a slightly more heterodox approach to reality:

“It’s like buying the time of a popular consultant,” says Ivanov, CEO of Polynom Crypto Capital in Moscow. “It’s the old basic principle of economy — time is money. He is tokenizing his time and selling it in advance.”

Also, in a response to John McAfee’s Tweet, an account that is supposed to belong to AEDAN Financial Corp quickly wrote about their works: The development of a crypto-backed monetary implementation of FIAT. Such a venture would have been filed with the SEC.

It seems that now cryptos want to counter-attack in their battle against FIAT.