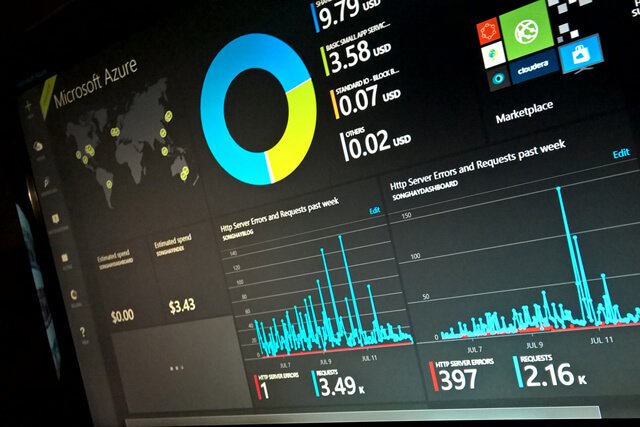 Microsoft is Serious About Blockchain With Major Announcements and PRs

Microsoft Azure is investing a lot of resources in the development of a platform to optimize the creation of blockchain-based applications.

Despite Bill Gates’ negative statements about Bitcoin and cryptocurrencies, Microsoft’s interest in blockchain has been growing. On May 7th, Microsoft Azure -a cloud computing platform- announced the creation of its Azure Blockchain Workbench service.

The official press release, entitled ‘Simplifying blockchain app development with Azure Blockchain Workbench,’ states that the company’s objective is to create templates to develop blockchain applications that adapt to the requirements of its users.

This move seems to point to direct competition with Amazon, which had previously announced the offer of similar services.

According to the company, the development of the platform has proven successful, allowing several significant industries around the world to adopt blockchain technologies quickly and reliably:

“Engagement in our preview program has been overwhelming. Since September, hundreds of customers and partners have joined the preview and used Workbench to create innovative solutions to shared business problems.

In Israel, Bank Hapoalim is using Workbench to build a solution that simplifies the time consuming, manual processes required to issue bank guarantees for large purchases like real estate.

In Italy, Nestle has teamed up with Microsoft Digital to pilot an IoT-enabled solution that tracks the movement of its famous and delicious Bacio Perugina chocolate along the supply chain.

And in the US, Apttus is using Workbench to help banks and asset managers quickly build and deploy smart contracts to secure, track and adjust to changes in the loans that are securitized and pooled for collateralized debt instruments, protecting against risks that contributed to the 2008 financial crisis.

Business leaders are also looking to our partners to help them build these applications. Companies like Quisitive, Macaw, and Cegeka have built blockchain centers of excellence using Workbench to help customers ideate on blockchain applications in their business. Workbench frees up these partners to move beyond infrastructure and deliver differentiated, high-value service to their clients.

The use of Azure Workbench would considerably reduce the need to develop blockchain networks from scratch. This optimizes costs, reduces the effort required and facilitates subsequent maintenance expenses as there is a shared environment among several customers around the world.

The Microsoft Azure team also mentioned that they were traveling to New York City to participate in NY Blockchain Week. They registered for the NY Consensus Summit, one of the world’s most important events in the development of blockchain technologies. Having two separate stands, they want to get most of  the attention:

Microsoft will be sharing spaces with other prestigious companies such as Etoro, NEM, Ripple, Qtum, IBM, Circle, Kraken, SAP, CME Group, Changelly, Bitcoin.com, Bitfury, Santander among dozens of important names related to the world of finance, technology, and blockchain in general.

Such is the importance of this event that financial analysts like Tom Lee predict a possible increase in BTC prices after the development of this summit:

Bottom line: We expect BTC and cryptocurrencies to behave similarly to prior years and rally during Consensus,”