The hit on @bitcoin’s twitter account signals or wholly indicates that it had violated the rule of the social media platform. There is no doubt that bigwig social media like Twitter, Facebook and their contemporary have guidelines which they use in regulating their activity and users so as to keep the platform as modest as possible.

On Sunday, April 8, @bitcoin was suspended. Although a clear reason has not been aired, but it’s suspected to have resulted from the lasting arguments between BTC and BCH enthusiasts as a sizeable number of the former’s lovers lodged complain.

The CEO of Blockchain start-up @Space Chain, Jeff Garzik, in a tweet said:

“The @Twitter curation of its namespace is amazingly poor, @jack. Squatters and bots abound. The @bitcoin account griefer-jacking is just the latest episode”.

Different speculations continue to rouse as the real reason for the ban is still under obscurity but most agreed that it must have resulted from a bad vice.

“Twitter is rewarding bad behavior. To review, #Core fans – Reported @Bitcoin acct for abuse – Reported my Reddit and GitHub accounts for abuse – Drowned Bitpay and Xapo apps with one-star reviews and votes etc. This is how they “debate” with those who disagree”.

Twitter’s rule which can be attributed to having caused the embargo includes the following:

While the account is used to promote Bitcoin Cash, another rule of the social media that can be said to have been perpetrated is;

Therefore, Maybe Twitter attributed promoting Bitcoin Cash on a platform impersonating the coin but not affiliated to it as a deceit.

The Reinstatement Of The Account And The Mystery Of It.

Surely, after every darkness, there is lightening. 16 hours back, the account owner twitted “I’m back”. 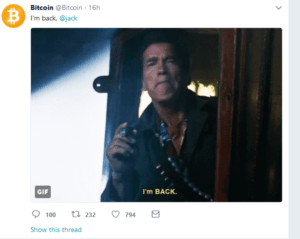 Not just coming back, but there had been a mysterious journey before the reinstatement and after.

By default, according to the social platform’s policy, after a ban, the owner is granted an appeal while the account name is reserved. Alternatively, the username was made open to the market.

The account owner, after the reinstatement, in a statement tweeted that within 24hrs of the ban, “A new account using the same username began posting nonsense”.

Another controversial event which the ban ushered is the claim that Twitter’s Jack Dorsey, an investor of Lightning Network, a challenger of Bitcoin Cash for low-cost transactions was believed to have underpinned the taking down of the account.

“In any case, I’d love to hear a public explanation from @twittersupport about why #bitcoin competitor #LightningNetwork investor @jack disabled this account, gave it to someone else”, @bitcoin twitted.

Lastly, the account owner complained that its account which previously had about 700, 000 followers, when returned, had been slashed.