NANO (NANO)–While most of the cryptomarket experienced a relative stagnation following yesterday’s 30 million USD Bithumb hack, NANO saw double digit gains on the day, trading for 2.95 USD (as of writing). Despite the massive deflation in value after the scandal of February’s BitGrail hack, which resulted in the theft of 17 million NANO (then listed as Raiblocks XRB), NANO has managed to retain the strength of community and development presence to continue driving evolution for the currency.

The long awaited release of mobile-capable wallets was announced today by the NANO Team, with Android functionality already available and an IOS app coming in the next several days. In addition to the mobile release, the Team announced open source downloads for Windows, MAC and Linux, praising the community for helping in the development of the wallet dating back to last year. 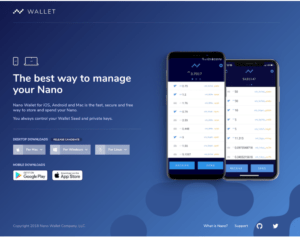 While the features of the wallet are standard for cryptocurrency, it does provide an easier outlet for sending and storing coins off of exchanges. NANO has had a notorious history for difficulty in being listed on exchanges, with most investors at this point accustomed to the regular maintenance outages that prevent withdrawals. NANO’s open source wallet will allow for crowd-sourced improvement via the community base, in addition to providing beginners and novice crypto users an easy to access, easy to use medium for the currency.

Feature Highlights:
iOS & Android:
* Send and receive: use Nano wallet with friends or your favorite Nano-accepting service provider
* Currency converter to send in Nano or in your local currency
* Share card to text to your friends so they can send you Nano

From the beginning, NANO’s greatest draw has been its impressive utility as a transacting currency. Now enthusiasts of the coin can demonstrate to friends, family and strangers the ease of sending and receiving through the downloadable application. To outsiders of crypto, the advent of a feature as basic as a mobile wallet may not have the same impact as it does for current investors, but it provide a necessary step for greater adoption. With the rising environmental and energy costs associated with Bitcoin reaching international attention, NANO’s fee-less, instant transfer of money may become a standout in the sea of cryptocurrencies.

As one Reddit user pointed out, the consistency of the NANO Team in meeting project goals has been one of the more inspiring features of investing in the currency, despite the FUD and fallout over February’s high-profile hack.

three times in a row nano team delivers from nanocurrency

In addition to the positive price movement corresponding with the release of NANO’s mobile wallets, the coin was also listed on cryptocurrency exchange Coinex.

While the price of NANO has a long way to go before eclipsing January’s all time high of 36 USD (constituting a 92% loss in value), most of the conditions depressing the currency’s value have been out of the control of the investor base and community. February’s monstrous hack was one of the more eyebrow-raising thefts to occur in cryptocurrency history, with both BitGrail’s owner and the NANO team being brought to court over allegations of foul play. The subsequent downfall in price was as much driven by the overbought conditions of the entire crypto market, as opposed to an indictment of NANO’s technology. Small wins such as the establishment of a user friendly, mobile wallet go a long way in rebuilding the NANO investment base, in addition to putting the currency in a spot of greater visibility to allow the technology to speak for itself.