NANO (NANO)–In the midst of a small recovery for cryptocurrency, after shedding nearly 85 billion USD in market capitalization over the last week, NANO led the way with a 20% increase in price. Investors on Binance will have noticed, around 6am Eastern U.S. time, the price of NANO shot as high as 5172 satoshis before selling off to the 4400 satoshi range. 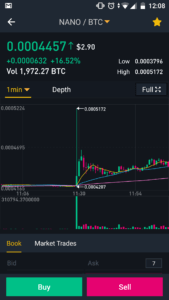 While Redditors were quick to pick up on the sudden pump in price, it has led to speculation over the reason for such a large purchase, all done through a market order (meaning the buyer was accepting whatever sell price was available to fill the order). As some users pointed out, the lack of liquidity in the market (i.e. not enough volume of coins being moved), could have led to an investor making such a large purchase impacting the price outright:

It’s unusual to see an investor, particularly one with enough capital to move the entire currency valuation 22% in a single trade, employ such a heavy-handed maneuver. The result has led to several speculative inquiries into what’s going on with NANO:

NANO has suffered one of the worst percentage losses in all of cryptocurrency, having been through the 195 million USD hack of BitGrail, and developer lawsuit that followed. While the currency has arguably been due for a pump after reaching a 93% decrease since January’s all time high, the price movement that occurred this morning could be indicative of greater manipulation ahead. The project boasts industry leading transaction speeds and a zero-fee model, but the investor base and community is still waiting on the coin’s value to reflect what the technology is offering. Look for NANO’s road to recovery to be one of the more interesting story lines in cryptocurrency over the second half of this year.