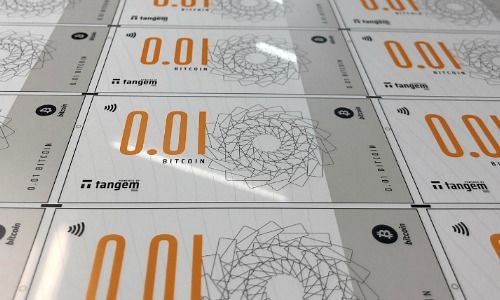 The worst of the crypto-markets seem to be over after the shocking Upbit news that it was being investigated for fraud by South Korean Officials. What has now happened is that majority of the cryptocurrencies are in the green on this fine Mother’s Day!

But let us go on a tangent and talk about the possibility of having Bitcoin (BTC) notes in circulation.

Yes. A company in Singapore called Tangem has successfully released a new smart banknote platform. It has launched a pilot sale of the physical Bitcoin notes at a Megafash Suntec City store in Singapore. The notes of denominations of 0.01 and 0.05 BTC are available immediately and started on the 3rd of May. The notes aim at improving the simplicity of owning BTC and circulating it as a regular form of physical money rather than a digital one in a wallet.

The technology is based on a recently developed chip from Samsung Semiconductor. Tangem is also delivering the first shipment fo 10,000 notes to prospective partners and distributors around the world for more pilot testing.

Perhaps such progress in the Crypto-verse is what is making China to start publishing a monthly crypto report.

The Chinese government has been overly strict on the presence of Crypto and its use within its borders. However, in a classic Art of War strategy, the same government is keeping track of the cryptocurrencies in the markets on a monthly basis. As Sun Tzu states in the legendary combat manual mentioned, it is always good to know your enemy well. So you can also adapt in a manner to combat his strategies in preparation for a victory.

What now remains to be answered is if China will go ahead with plans of releasing its own Crypto version of the Yuan in a bid to combat the rest of the crypto-verse and to have a degree of control in the markets.

Only time will reveal the true nature of the Chinese government’s actions.