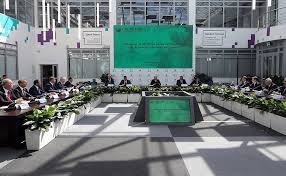 The Russian economist, Vladislav Ginko, is well known for his past bold claims concerning Russia’s interest with Bitcoin. Recently he rushed to twitter exclaiming:

“BREAKING: Putin aims to heavily increase investments into new technologies including AI and blockchain. This topic will be one of the topic scheduled to be discussed in Kremlin during the meeting with Russian billionaire Viktor Vekselberg tomorrow”.

Well, Vladislav is right about Putin’s intention to set apart more funds for artificial intelligence based research. However, there is not much “breaking” about Vladislav’s post. Putin has, in the past, not been coy about his interest in AI. As an illustration on Sept 1, 2017, on what is known as “Knowledge Day” in Russia, Putin made the bold claim that “whoever leads in AI will rule the world.”

The Russian president has now put his government’s money where his mouth is. At a Russian meeting that is meant to spur on the development of AI in Russia, Putin asserted that the development of advanced AI were some of the tasks the country was gearing to solve in the future.

Putin Wants Russia To Lead In Blockchain And AI Research

He furthermore implored the sitting members to enable Russia to become the key platform that will solve complex science-based problems in collaboration with other scientists around the globe. He additionally proposed that these complex scientific problems, be solved in international mathematical centers. With that, the president put an emphasis on the opening of international mathematical centers in Sochi and St. Petersburg in 2020.

Following Putin’s declaration on AI, Maksim Akimov the Russian Deputy Prime Minister notified his president that the government’s budget on AI projects would require $1.3 billion in the next six years if approved. He, however, said that the AI project could be designed by October 2019.

Russia has in the past let AI research and development lag behind its perceived competitors like China and the US.  Reports indicate that Russia has only dedicated $15 million to AI research. China, for instance, committed its $12 billion to AI-based systems in 2017.  It is expected that this allocation will increase five fold.

Complementing their quest are some of the greatest tech minds. The country has, nonetheless, underutilized them in the field of AI research due to a lack of administrative support. The Russian president recognized his country’s competitive advantages and healthy starting conditions for the race to AI and blockchain superiority.

He went further and cited the Russian’s advantage of high internet and mobile communications penetration rates that were some of the most affordable globally. The president, accordingly, set a growth goal for the active use of blockchain and AI in Russian companies to 10 percent by 2024 and 20 percent by 2030 saying:

“We must ensure technological sovereignty in the field of artificial intelligence. This is the most important condition for the viability of our business and the economy, the quality of life of Russian citizens, the security and defense capability of the state. It is not only about algorithms for individual highly specialized tasks, we need universal solutions, the use of which gives the maximum effect, and in any industry.”

It is highly hoped that the current bullish sentiment Putin has over AI and blockchain research will go beyond Russia’s fascination with defense and weaponry. In the past, the country has mostly invested in defense-oriented AI based projects.