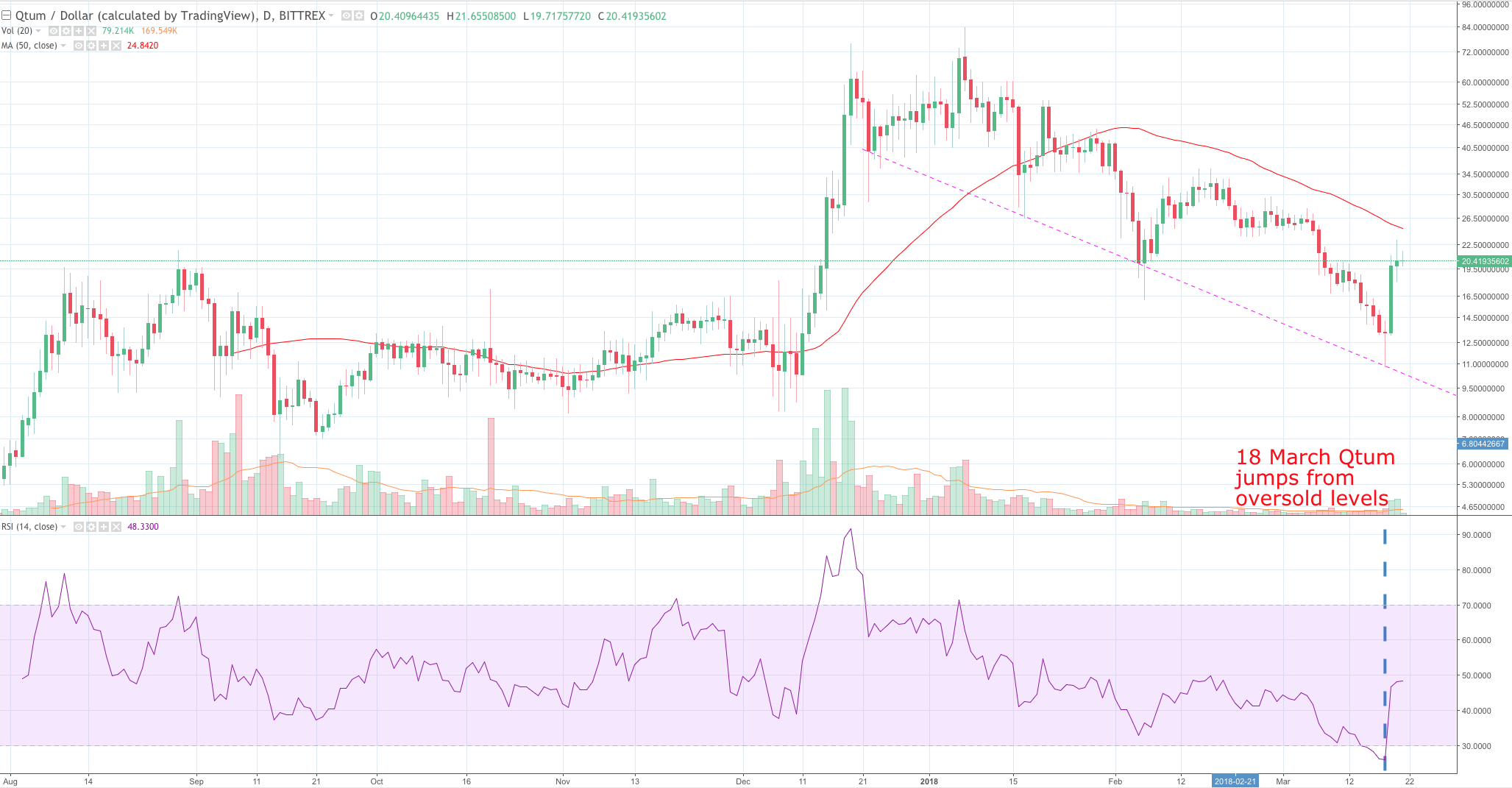 Qtum continues to be relatively undervalued compared to other top-tier crypto.

However, that seems to be changing with the price action of the past two days, which saw a near doubling in value for the crypto asset. Binance added the QTUM/BNB and QTUM/USDT pairs on Monday.

Given the strength of its blockchain’s adoption metrics, a unique added-value proposition, the technical developments soon to come on stream and the impressive collection of projects and partners it is attracting to its ecosystem, it remains surprising how undervalued Qtum still is.

Qtum, which has a fully functioning and busy 3rd-gen blockchain, has a market cap of just $1.5 billion compared to Cardano on $5.7 billion with a blockchain that is still being built.

Some have derided Qtum as just another Bitcoin Core fork, but that is very far from the truth and confuses what the Qtum Foundation is aiming to achieve.

Essentially Qtum takes the best of both worlds from Bitcoin and Ethereum. Bitcoin’s fundamental value proposition comes from being the first crypto and by virtue of that, being the most secure and stable blockchain in existence. Think of the bitcoin network as a computer and it has never been hacked and never had any down time.

Best of Bitcoin and Ethereum

Qtum rests on that success by basing its Qtum Virtual Machine (QVM) on bitcoin’s unspent transaction output model (UTXO). At the same time it also combines that with  the best of the Ethereum Virtual Machine (EVM) through being more than a payment and settlement platform like bitcoin by enabling the execution of smart contracts.

And again, Qtum takes the good and dispenses with the bad – instead of proof-of-work (PoW) it deploays a proof-of-stake consensus mechanism. That’s something the Ethereum community has discussed at length but, as yet, failed to implement. So you could say that QVM is similar to EVM, but just much better.

Qtum’s design decisions have important practical implications. For example, Ethereum projects can be easily ported to Qtum by using its Account Abstraction Layer whilst interoperability with blockchains using the UTXO model is also available.

Using bitcoin’s UTXO allows it to implement Simple Payment Verification so “light wallets” can be used on the blockchain, while the zero-knowledge zk-SNARK proof system embedded in the consensus mechanism further extends efficiency.

And soon the blockchain will be able to accept smart contracts written with the x86 chipset when it launches the x86 Virtual Machine. The implications of this is that smart contracts can be written in 32-bit languages such as the heavyweight C++.

In addition, the abandonment of PoW means the processing footprint for block verification is orders of magnitude smaller than Bitcoin Core or EVM which means nodes can run on smartphones, even Internet of Things devices. Proof of this is seen in its most recent partnership with SpaceChain to send CubeSat satellites into orbit running Qtum Virtual Machine. The CubeSats only require the computing power of a Raspberry Pi to do their stuff. Yes you’ve guessed it – the Qtum blockchain can be mined on a Raspberry Pi, with the specs of its latest iteration coming in four ARM Cortex-A7 cores, a speed of 900MHz and 1GB RAM.

This all fits with Qtum’s goal of making blockchain technology practical for adoption by businesses in an array of industries. This year alone it has signed a deal with Chinese tech company Baofeng, the owner of a popular video player and 360 which makes cyber security software and whose 360 Total Security family of cyber security products is used by more than 600 million customers, mostly in China.

In line with the rest of the market Qtum has broken out of this year’s down trend but, significantly, it has done so even more decisively.

The relative strength index shows Qtum jumping out of the oversold region on 18-20 March, rising 82%, to trade at $21.92 yesterday. At the time of writing Qtum is priced at $20.70. Qtum’s all-time high is $103 but that was on the basis of $50 dollar spike out of a rangebound average for January of around $55, which means there is plenty of room for improvement.

Qtum chart shows the crypto-asset catching breath, up only 0.38% so far today, according to Coinmarketcap, lagging other top alts. That’s probably a good thing though, as it builds in some consolidation of the price gains of recent days and in turn could present an entry point for newcomers, especially if the price firms at these levels.

However, as we have seen recently, what happens with bitcoin can determine the future direction of the market overall The G20’s lack of regulatory initiatives on crypto has put in a floor and has put to rest, for now, fears of the “death cross”, where the 50-day simple moving average (SMA) falls below the 200-day SMA.

Nevertheless, as the bearish down-draft eases, around $20 or so could prove a reasonable entry point for buyers to start adding, especially if the price comes off a couple of per cent.

With 5,999 nodes on its blockchain at the last count, the majority of that total operating in China (3,470), followed by South Korea (1,008) and the US bringing up third place on 554, Qtum is well-positioned to be one of the winners in China and the rest of South East Asia.

With a team headed up by 27-year-old Patrick Dai, a Computer Science PhD candidate at the Chinese Academy of Sciences, and a one-time Alibaba senior product manager, it might be a good idea to keep Qtum on your portfolio radar.

Qtum is based in Singapore, which is a Mandarin-speaking city state with close links to China. And its colonial past means it has a bilingual English-speaking population, giving this project a unique position as Singapore develops as a hub for blockchain development in the Asia region.