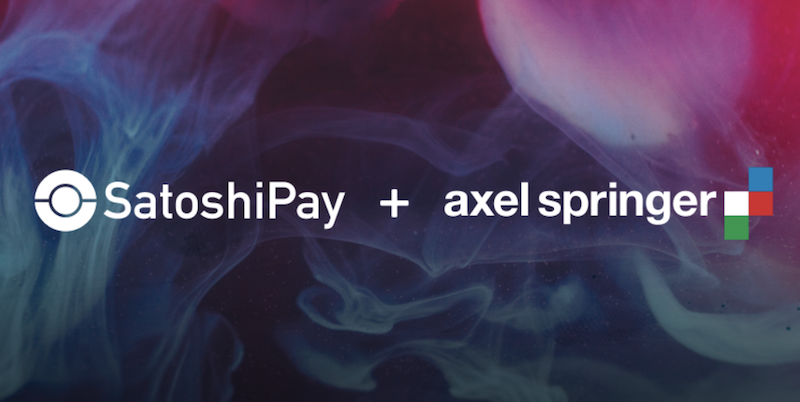 AxelSpringer SE is Europe’s largest digital content company. Its revenues in 2017 exceeded 3.5 billion Euros. The company manages a portfolio of brands that includes Business Insider, Bild, Die Welt and Upday. It is also important to note that over 15,000 people in more than 40 countries work for the company.

For its part, SatoshiPay is a London startup founded in 2014 focused on developing solutions to provide frictionless micropayment solutions. Currently, the SatoshiPay platform is developed on Stellar’s blockchain.

Valentin Schöndienst, Senior Vice President of New Business, Axel Springer SE was enthusiastic about this partnership, highlighting the advantages of using SatoshiPay technology in the monetization process of digital content payment. Although, instead of cryptocurrencies, I speak of “blockchain payments.”

“Blockchain payments can significantly reduce transaction costs and thus enable new monetization systems for content. SatoshiPay offers a turnkey solution that allows us to instantly use blockchain technology and offer it to our customers”.

Meinhard Benn, Founder and CEO of SatoshiPay said this partnership could help meet the startup goal of driving global adoption of cryptocurrencies:

“We are excited to work with Axel Springer, who recognise the immense potential of blockchain technology. As one of the few companies with a market-ready blockchain payment solution, we are focused on bringing this technology from laboratories into the mainstream. This has been SatoshiPay’s mission since its foundation in 2014, and a partner with the tremendous reach of Axel Springer gives us the opportunity to deliver on this promise.”

He also took the opportunity to thank the Stellar Development Foundation team “which supports this cooperation with a seven-figure partnership grant.

The Axel Springer SE team had already worked with SatoshiPay. In 2015 the blockchain startup developed the program Axel Springer Plug and Play which has invested in over 40 tech-oriented startups around the world.

The community of crypto users reacted positively to the news. The optimism and excitement of fans and maximalists was evident, especially on twitter where positive comments quickly began to appear

I can confirm that switching to the SatoshiPay Horizon servers from SDF's saves my trading bot ~0.5 seconds per cycle. That's non-trivial, and I'm in the US (Chicago)

Top 👍 Mass adaption is underway. 2019 will be exciting. pic.twitter.com/5N2G9nad5a

It couldn’t have come at a better time ! Amen
Well done you lot ! We are proud of you !lol #blu pic.twitter.com/WzsXaxb52w