Satoshi’s Place: “Unleash” the Power of Lightning Network While Being Foolish

The Internet is a curious and fantastic place. And while its almost infinite uses can drive humanity’s development in unsuspected ways, leisure and entertainment usually interrupt those opportunities.

Of all the information and knowledge that humans can acquire through the Internet, kitten videos seem to be the most exciting thing ever, and while it’s great to share information, it’s much better to share a meme.

The world of blockchain technologies and cryptocurrencies does not escape this situation. And what began with a technological revolution to change the world economic system, culminated in the creation of altcoins such as Dogecoin, tittiecoin and many “similar projects.”

For tech enthusiasts, second layer solutions are a breakthrough that is allowing them to leverage the scalability of Bitcoin and similar blockchains in a significant way. Lightning Network is not yet implemented. However its beta phase is now available for testing.

Using Technology to Fool Around

Lighting Network is one of the most ambitious bitcoin projects, developed to make payments through a kind of parallel place that is not added to the blockchain until the payment channel is closed.

However, there is a website that has decided to expand the original vision of Lightning Network to something a little more…, unorthodox: Satoshi’s Place

Satoshi’s Place is nothing more than an open canvas that allows users to express their ideas and make drawings with a tool similar to the old Ms. Paint.

However, what makes this place curious is that each pixel used in the new drawing has a value of 1 Satoshi, and each transaction will be done on the Lighting Network. The creator mentions precisely that he designed the site on an experimental basis for “figure things out.”

“I created satoshis.place to explore the application of micro-transactions in the context of multiplayer games. I also just wanted to mess around with running a Lightning node figuring out how this stuff works.”

But as always, leisure beats science. And this experimental tool to test the strength of Lighting Network has become a resource for users to unleash their creativity. And penises seem to be their preferred choice.

There’s something funny about Satoshi’s Place. Every day visitors can come across a new “masterpiece.” Even Jameson Loop, an important developer, and creator of satoshi.info said he has his favorite painting:

By my count there are no fewer than 13 dicks drawn on the Lightning-powered graffiti app https://t.co/uayIGVqafa but this one takes the cake. pic.twitter.com/Oi2MSqWLQl

Satoshi’s Place’s creator comments that this experiment took a course towards fun. Something that doesn’t seem to bother him at all:

“I did not anticipate how creative people would get with penises. It’s…. majestic.”

The mockery has not been long in coming. Some users have brought the BTC vs. BCH fight to the scene. While some make fun of Roger Ver (something very common in the place along with penises)… 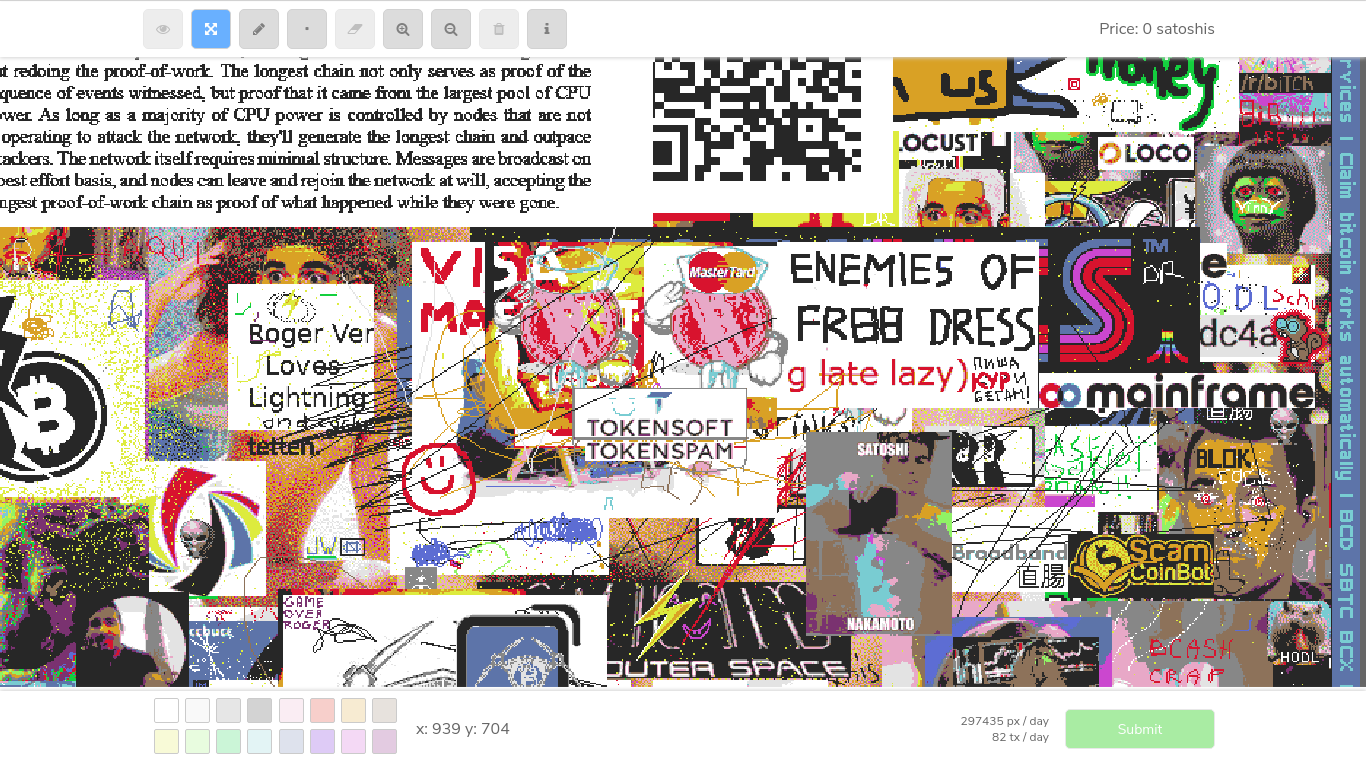 Other BCH enthusiasts call for help in defending themselves against “attacks” and counterattacks:

Somebody keeps painting over my #BCH tag on satoshis.place, help me save it and make it bigger! from btc

If you want to paint your own “Mona Lisa,”go to https://satoshis.place/ to start painting. When you have finished the creation, click the “submit” button. The website will then send you the corresponding invoice and… That’s It!

"Dad, tell me the story of Bitcoin again?"
"Well son, in 2009, Satoshi wrote his paper. And then in 2017 scientists built Lightning on top of Bitcoin, facilitating true online micropayments for the first time ever."
"And what did people do with Lightning, dad?" pic.twitter.com/QxwOoSqAsZ