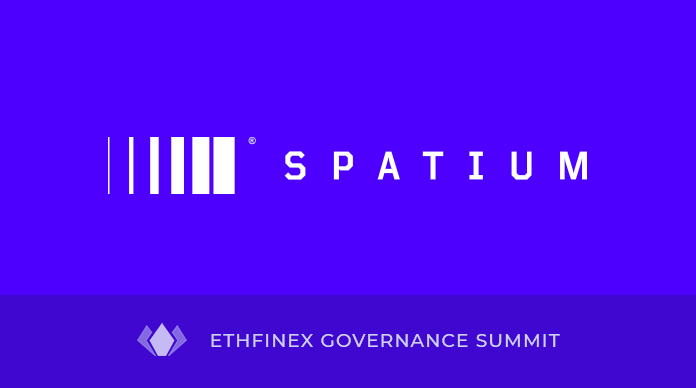 Ethfinex’ summit brings together academics, entrepreneurs, innovators, and influencers with insights to offer on the latest developments in distributed governance.

Centralized security of today’s wallets and major exchanges is a major concern that drew attention from the attendees. With all the news about exchanges and wallets getting hacked, the very idea of putting trust into a private key (no matter how secure) was questioned.

The question became especially pressing after Ethfinex announced the creation of Ethfinex Trustless, a new trading platform that allows traders to trade without sending their funds to the exchange. This places security, privacy, and control in the hands of the users. But how can the users make sure that their wallet is secure and private enough for their funds not to be stolen?

This is a problem already solved by Spatium, whose wallet is unhackable due to its distributed system of signing transactions — without a private key. Moreover, Spatium’s protocol implements distributed storage of user data among participating devices and on the blockchain itself. In a validation of its technology, Spatium passed a cybersecurity audit from Sera-Brynn, a Top 5 evaluator.

“As soon as Ethfinex Trustless was announced, there was an audience question about how to keep one’s funds safe,” notes the Spatium project’s CEO, Geray Yusifov: “Ethfinex responded that, essentially, each user needs to find a secure wallet. This is where Spatium saves the day, providing a secure wallet that any trader wishing to use Ethfinex Trustless can rely on to crypto securely.”

Spatium’s software wallet is already available in Google Play and the App Store, where anyone can download it and get the security benefit of Spatium’s keyless approach to transaction signing. Summit attendees appreciated the existence of a software wallet that is more secure than the hardware wallets currently on the market. Without an exchange taking care of their funds’ custody, traders can use Spatium’s wallet today to take advantage of the convenience offered by Ethfinex Trustless while knowing that their funds are fully secure in their own wallet.

“As traders ourselves, we understand the importance of keeping custody of your assets,” explains Spatium’s CTO, Valery Vashkinel: “So the funds in our wallet are continuously protected by our unhackable, keyless, security, giving traders the peace of mind they need to safely trade via Ethfinex Trustless.”

In their conversations with the Spatium team, major stakeholders in the crypto community showed their appreciation of how Spatium’s keyless, distributed way of signing transactions and storing data compliments Ethfinex Trustless.

As the Summit and the announcement of Ethfinex Trustless showed, security and custodianship of funds are paramount to using cryptocurrencies with comfort and confidence. This fits right within Spatium’s philosophy that everyone should be able to “crypto securely.”

More information about Spatium is available on their website at Spatium.net. Or see their GitHub repository at https://github.com/CaspianTechnologies/Spatium.

The Spatium multiservice platform is based on the Spatium Protocol, which eliminates the single point of attack that leaves current wallets so vulnerable – the private key. Instead, pieces of authentication data are spread out among several participating devices and the blockchain and together sign transactions without ever leaving their respective devices. Based on this technology, the company has already released the most secure software wallet on the market, to be followed by a novel hardware wallet, enterprise wallet solution, ICO service, and more components of the multiservice platform that allows users to crypto securely.

For all media inquiries please contact us at [email protected] and see the full Media Kit here.