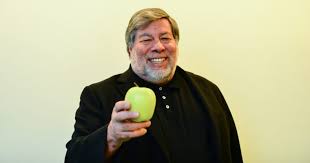 The co-founder of Apple, Steve Wozniak, has recently compared Ethereum (ETH) to a young Apple company back in the 80s. To be exact, he said that Ethereum, like Apple back then, is a platform where developers can create their own Decentralized Applications that will simplify the day to day activities of the end users. He was keen to note that back when Apple was starting out, they did not need to do much advertising for their products, for the real advertisers were the developers using their software and hardware to do amazing things.

This is the exact same thing happening with Ethereum. Every new ICO wants to build on the platform. The product (the open source Ether platform) is advertising itself through developers using it.

Wozniak said the above during an ongoing conference that ends in Vienna called WeAreDevelopers. In the interview Wozniak had this to say:

Here’s all the documentation, open source, you can see how you develop parts, look at the examples we have done. How to develop software, how to modify the softwares in here.

It was a platform for others, so thousands of companies started up. Sometimes high school kids started their own company, and then they’d put up little ads in little electronic journals, ads for my product, for the Apple 2.

Everybody in the world was advertising for us and we didn’t have to. So platforms is how the world can grow by opening up to millions of other smart people.

The product that changed my life the most from Apple isn’t the Iphone, it’s the App Store. The apps that are in the app store. Third party apps developed by all the people with all the ideas all over the place. And that’s an example of a platform

Although Mr. Wozniak admits that he does not invest in stocks or cryptocurrencies, he does own Bitcoin (BTC) and Ethereum (ETH) for experimental purposes such as travelling without credit cards and cash. He owns 1 BTC and 2 ETH. He says he loves to keep things simple in his life and does not like the life of a trader of always looking at the markets to check the prices.

He also stated that we as humans have an innate need to develop new things. The purpose of a developer and engineer has to be one of an evolving individual who is okay with the way things are changing. He or she has to evolve with the times.

The entire interview can be found on youtube here and starts around the 7:11 minute mark.