Lowering the Barrier to Entry for Cryptocurrency

Cryptocurrency is not going away no matter what the cynics say. According to CoinMarketCap, the size of the entire cryptocurrency market in 2017 was USD $600 billion, an enormous jump from USD $16 billion in 2016.

Singapore was also recently recognised as the world’s third-largest ICO launch pad in terms of money raised, after the United States and Switzerland, according to a report from information portal Funderbeam. Furthermore, The Monetary Authority of Singapore and The Association of Banks in Singapore also recently announced the successfully development of software prototypes in the use of blockchain technology for clearing and settlement of payments and securities.

Tokenize solves these problems by providing frictionless accessibility to purchasing cryptocurrency while utilizing hybrid wallet mechanisms to ensure that the users digital assets are safely kept away from malicious attacks. Additionally, Tokenize employs round-the-clock customer service specialists to cater to the needs of each user on its platform. Lastly, Tokenize aims to build a consolidated platform that addresses the gap in community engagement. This is done by combining the informative communities of reddit with the warranting mechanisms of Facebook which is integrated into Tokenize’s very own Token Store, an all-in-one platform for individuals to educate themselves on various tokens. 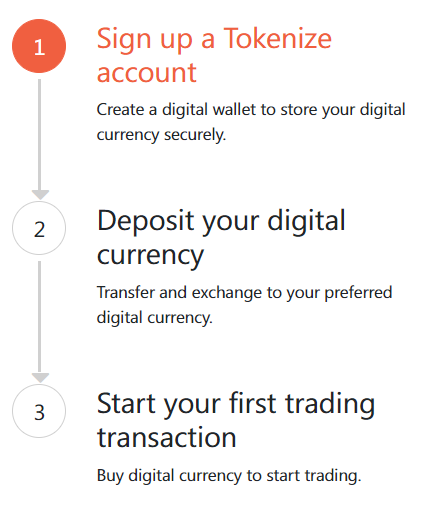 Tokenize Xchange also partners with rising blockchain projects that have the potential to add value to society and gives its users early access into these crowdfunding rounds. This gives the community a 2-way dynamic interaction and alleviates the need for many rounds of sign-ups, verifications and KYC/AML procedures. This is done by acting as the filterer for verifying credibility and viability of projects through an extremely strict and extensive grading criteria.

The Tokenize Xchange token (TKX) is an ERC20 token based on the Ethereum blockchain. However, Tokenize aims to eventually become an independent blockchain network based on their own Proof of Stake Protocol, the XChain.

“As a forex and crypto trader previously, it was a pain not having functional access to ﬁnancial tools in the cryptocurrency space. Due to this problem, I decided to procure a solution through the birth of Tokenize Xchange. We see the platform as a megastore (much like Amazon) that allows users to buy, sell, trade, invest and educate themselves on blockchain and cryptocurrencies. We are excited at the growth of Tokenize and the great team of advisors that have allowed us to scale so quickly,” said Mr. Hong Qi Yu, Founder of Tokenize Xchange.

Tokenize is a Singapore-based Digital Currency Exchange founded in October, 2017. Tokenize Exchange exists to connect an autonomous community with a purpose — to bring financial democracy back to the people in an orderly ecosystem. It is not just merely about exchanging cryptocurrencies, but deep down, Tokenize aims to achieve is ultimately the exchange of ideas, knowledge, and values.