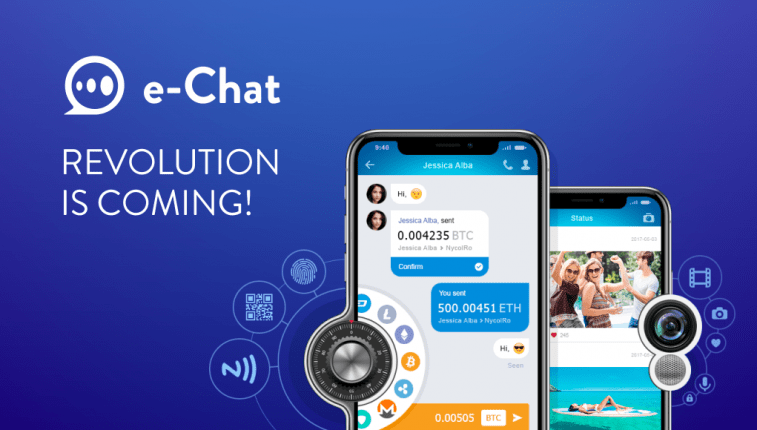 More and more people all over the world are interested in E-Chat — a decentralized messenger, especially since the start of the pre-ICO in the middle of October. The number of e-Chat subscribers in social networks has significantly increased. At the moment e-Chat has more than 42,000 followers on Facebook, 6,200 on Twitter and 870 on Telegram. However, their number is constantly growing. The potential audience of the e-Chat is more than 3 billion people. So what is the phenomenon behind e-Chat and how to start making profit on it right now?

First of all, it is necessary to mention that e-Chat can legally work in such a giant market as China with a population of 1.379 billion people, where more than 600 million people regularly use smartphones. It’s a very important moment, as in 2014 the Chinese authorities banned Google’s search engine and all related services: Google Play, Google Maps, Gmail. Also in China providers such as Facebook, YouTube, Instagram, Twitter, Yahoo! and SoundCloud have been blocked.

Not only e-Chat  can be interesting to the Chinese users, but to everyone who is interested in advanced technologies, taking care of his own security and wants to increase income. At the moment, e-Chat  is already a working application, available in the AppStore and PlayMarket. In the near future, it may seriously compete with existing messengers as it has several advantages making it truly unique. The most significant of them is a set of functions for monetizing content. Every user can earn on his popularity among audience and receive funds directly from it by cryptolike. It is also necessary to mention the decentralized system of personal data protection and multi currency wallet.

Everyone can start to earn money on e-Chat even right now, before the end of the pre-ICO on the 15th of November. It can be easily possible with the future growth of the exchange value for the ECHT token. The number of users and their content will grow particularly fast due to the Chinese market and users. The amount of memory allocated to them will be filled.  All this will require the addition of other tokens from users. For large amounts of memory, this will be a symbolic number, but in the context of millions of users, such a demand will be a significant increase to the exchange rate of the token on the market. Since users will be able to purchase the eternal volume of memory at a fixed price in tokens, it also leads to their growth. The token will burn out, which in the medium and long term will cause the deflation process and with the reduction of the number of tokens in turnover, will additionally contribute to the increase in value of the token and its exchange rate on the market.

Every innovative product is created by a powerful team of professionals with a good business reputation and e-Chat is not an exception. The chief executive officer  Thomas C. Sima, for example,  has over 15 years of experience working with international clients and have represented clients in a broad range of activities, from oil & gas to investment funds. The chief marketing officer, Edwin Dearborn, have delivered hundreds of workshops to over 10,000 individuals. The name of Vincent Veisman — the chief financial officer and Israel regional manager is well-known in the business sphere of his country and abroad. He successfully works as international financial adviser  and business development director in such companies as G Tech Media Development Ltd, Bank4YOU, etc.

As we mentioned earlier, e-Chat in comparison with other similar resources, will be able to work legally in China. The Asian market has a number of features. For that reason, an invite has been made to advisor, Jeff Marquass, who has over 17 years experience of successful work in different companies in Asia as he is really keen on Asian business ethics.

Disclaimer: The opinions expressed in this article do not represent the views of EthereumWorldNews or any of its team members. EthereumWorldNews is not responsible for the accuracy of any of the information supplied in Sponsored Stories/Press Releases such as this one.