With ‘Project Genesis’, TRON (TRX) Is Preparing For War

The cryptocurrency that strives to connect the world with “free content entertainment system”  using blockchain technology has once done it again, creating disruption in the financial market with a recent announcement made on its website and Twitter page that, it has launched Project Genesis [TRON PG] with the aim of expressing gratitude  to developers.

“To express our gratitude for the trust and support of TRON’s global developer community while enriching and expanding TRON’s ecosystem, we are launching Project Genesis: a reward pool totaling $2 billion USD and a variety of programs—all for the TRON community and developers!” 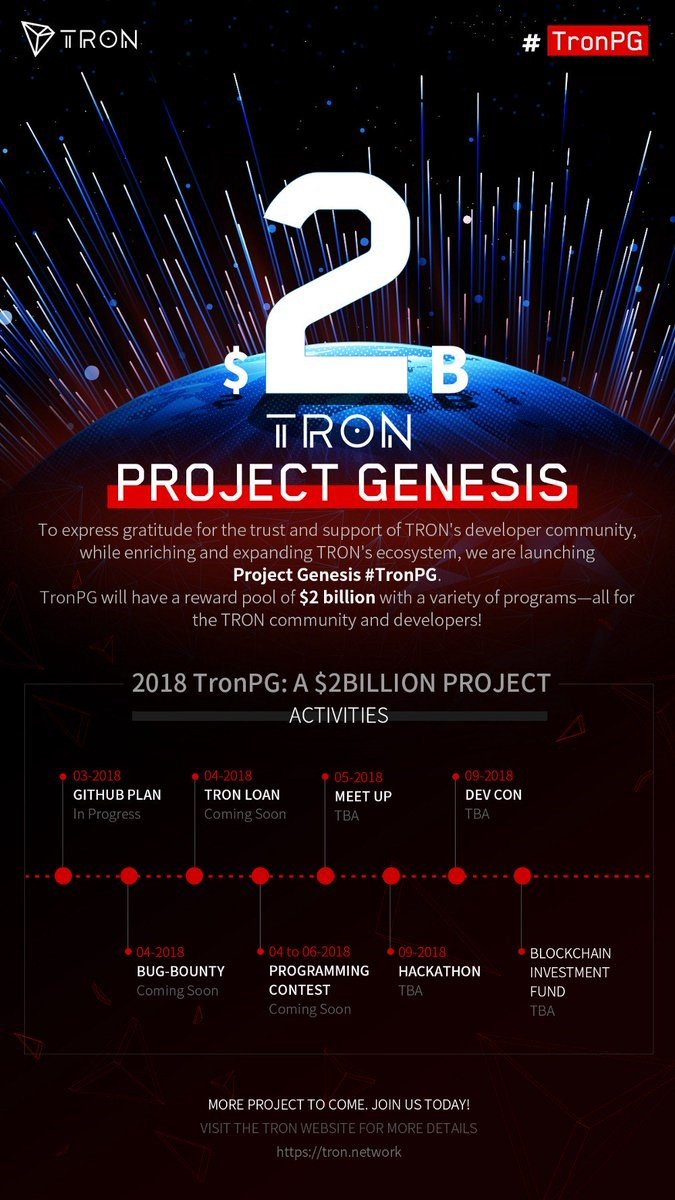 Confirming the Project Genesis launch, Justin Sun‏, the owner of Tron in a tweet stated:

“During our testnet launch, I announced that 1 Billion USD will be dedicated to the #TRON community rewards program. Now that number is 2 Billion! Welcome to Project Genesis. #TronPG $TRX #TRX”

The development, according to analysts is a great one for the altcoin as it continues countdown for Tron Main Net which would be launched on May 31. According to a post which Tron Lab released on its Medium page tagged “TronPG, $2 Billion, Only for Your Brilliance”, it’s slated the Project Genesis schedules between March 2018 (GITHUB plan) to September 2018(DEV CO):

Recently, Tron developers announced the altcoin’s first technical debut, TRON Test Net launch, and within 7 days of the launch, the altcoin had amplified its tentacles to 31 countries with 2500 nodes.

Tron In The Present Market.

Over the past few weeks, the crypto market has been bearish, with massive and unexpected fall. Few days back, the market turned around moving northward with the hope that altcoins will regain their value. Towards the end of yesterday, the market began to plunge and altcoins’ value dripped.

Tron, at present ranked 13, with a market capital of over 2.5 billion according to Coinranking, is priced 0.04 against dollar.

In the last 24hrs, the altcoin had lost 1.63% from its value, while over a period of 7 days, it had gained 7.48%, showing that the drip is a rise when compared to the price fall over few weeks.