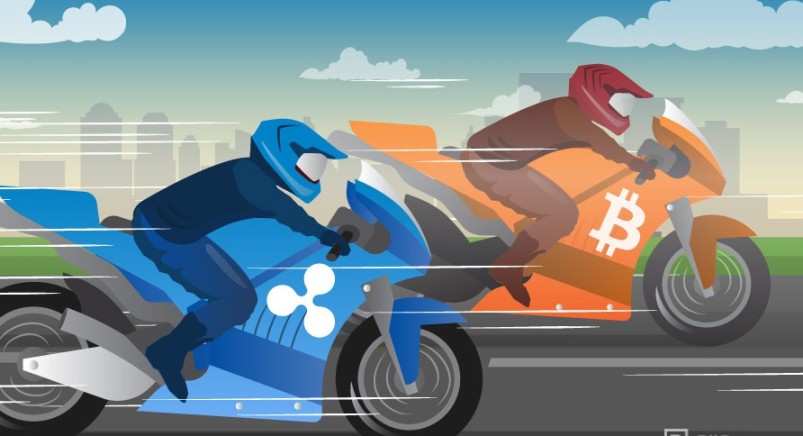 2018 has been a largely bearish year, and Bitcoin’s status as the most popular has attracted a lot of investment capital, although XRP has garnered some good following too. The most recent market events have left many with the indication that XRP may soon surpass Bitcoin to take the top spot.

While Bitcoin has maintained its dominance in terms of market capitalization, it’s currently not the most advanced cryptocurrency in the market. Others like XRP have come up to challenge it’s supremacy with their technical advantages.

Bitcoin Is On A Shaky Ground

The recent upgrade of the Bitcoin Cash network sparked a fierce hash war between the camps of Craig Wright’s Bitcoin Cash Satoshi Vision (BCHSV) and Roger Ver’s Bitcoin Cash ABC (BCHABC). As a result, Bitcoin was affected price-wise, dragging the entire market down with it. This undesirable development has left many skeptical of whether Bitcoin’s perception as a truly decentralized system is real anymore, given the clear demonstration that the actions of a handful of people can adversely affect its standing.

In other words, this realization puts Bitcoin’s utility into question. As such, a good percentage of investors have turned to other alternatives looking for better utility and security. In that sense, XRP has emerged as a pretty great choice. The fact that the crypto is slowly recovering even as Bitcoin and others struggle to stay afloat adds to the charm.

XRP Has Edged Out Ethereum

Although some may still harbor misgivings about XRP not being totally decentralized, the crypto has endured the bashing and become one of the largest in the market. After a close battle with and surpassing Ethereum in total market cap twice in a month, XRP has now managed to edge out the rival and grab the second spot right behind Bitcoin.

This is mainly due to Ripple’s efforts to expand its customer base over the recent months. More banks are joining the RippleNet where XRP is used as a base currency in cross-border funds transfer using XRapid.

RippleNet offers fast transactions with negligible fees, and banks want that. Some of the largest banks in the world, like Santander, Bank of America, and UBS, have already joined the network. Given that the number of institutions joining RippleNet is expected to grow exponentially in the coming months, it’s safe to say that XRP’s market cap will also grow exponentially. That could put Bitcoin within range and possibly strip it of its top position.