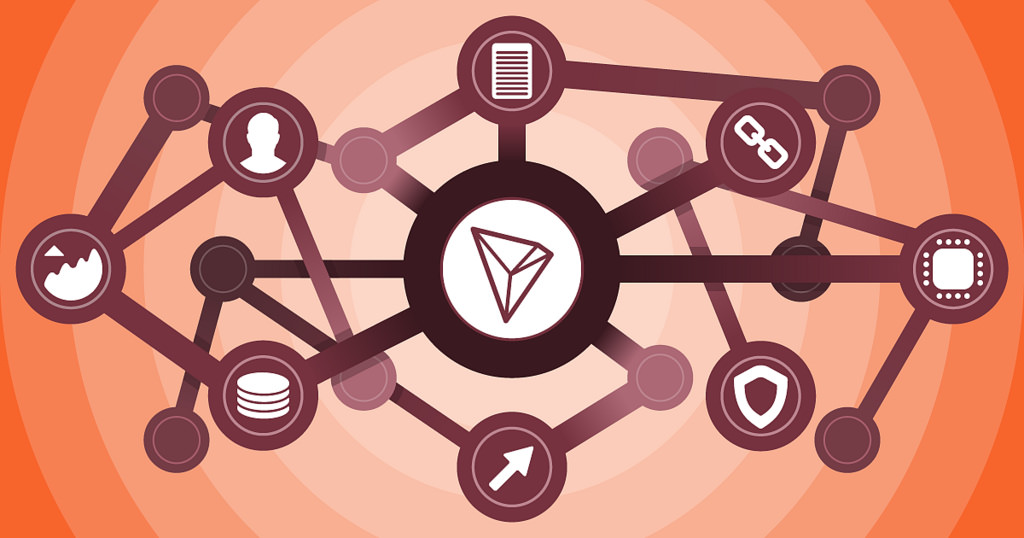 Tron might be riding the bullish wave that has so far lifted the crypto market to new aggregate value, clipping Bitcoin dominance in the process. But, aside the 19 percent spike in the last week and 6.1 percent rise in the last day, there are other fundamental reasons that cement our bullish stance.

From the many, one of them has to be the stride Tron has made in180 days after migrating from Ethereum and successfully launching their own blockchain and Turing complete virtual machine. Users continue to throng the platform, placing bets and playing games and issuing TRC-10 or 20 tokens.

Add this to the increasing number of exchange support, it is likely that TRX demand shall increase further boosting the network’s liquidity. Remember, Binance will list pair TUSD with TRX, ADA and NEO. 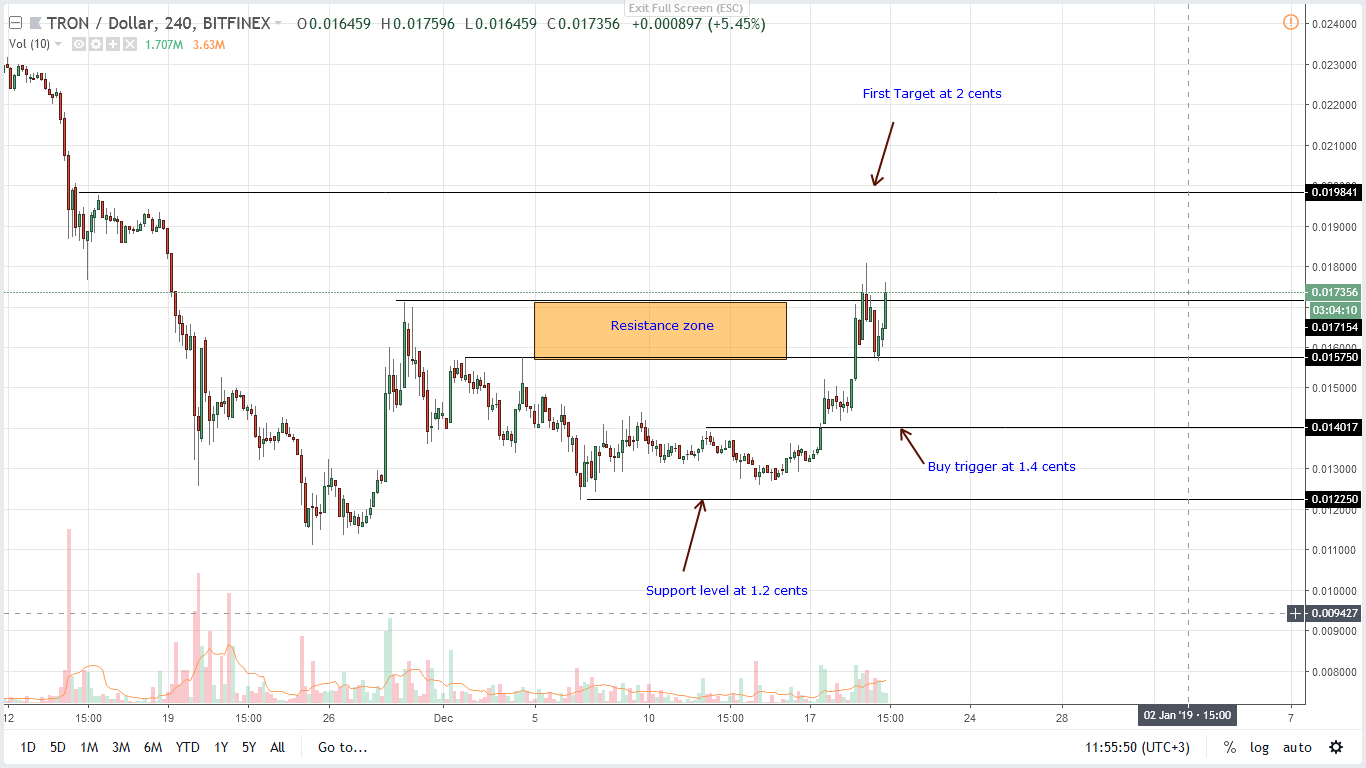 After months of lower lows, the demand of TRX is back. TRX is up 6.1 percent against the USD in the last day. Because of increasing user activity, chances are TRX might print new highs by the end of the year more so if prices break above 2 cents.

Thanks to today’s break and close above 16 cents, TRX/USD is now trending within a bullish breakout pattern invalidating bears of Nov 19-20 and nullifying the expected and/or bear trend resumption. As such, we recommend traders to load up on every correction with first target at 2 cents with safe stop at the lower limit of our resistance zone at 1.6 cents.

Note that average volumes are high and as long as TRX prices trend above 1.6 cents, buyers are in charge and ready for 2 cents or 3 cents in the short-term.

Our TRX/USD Trade plan will be as follows: 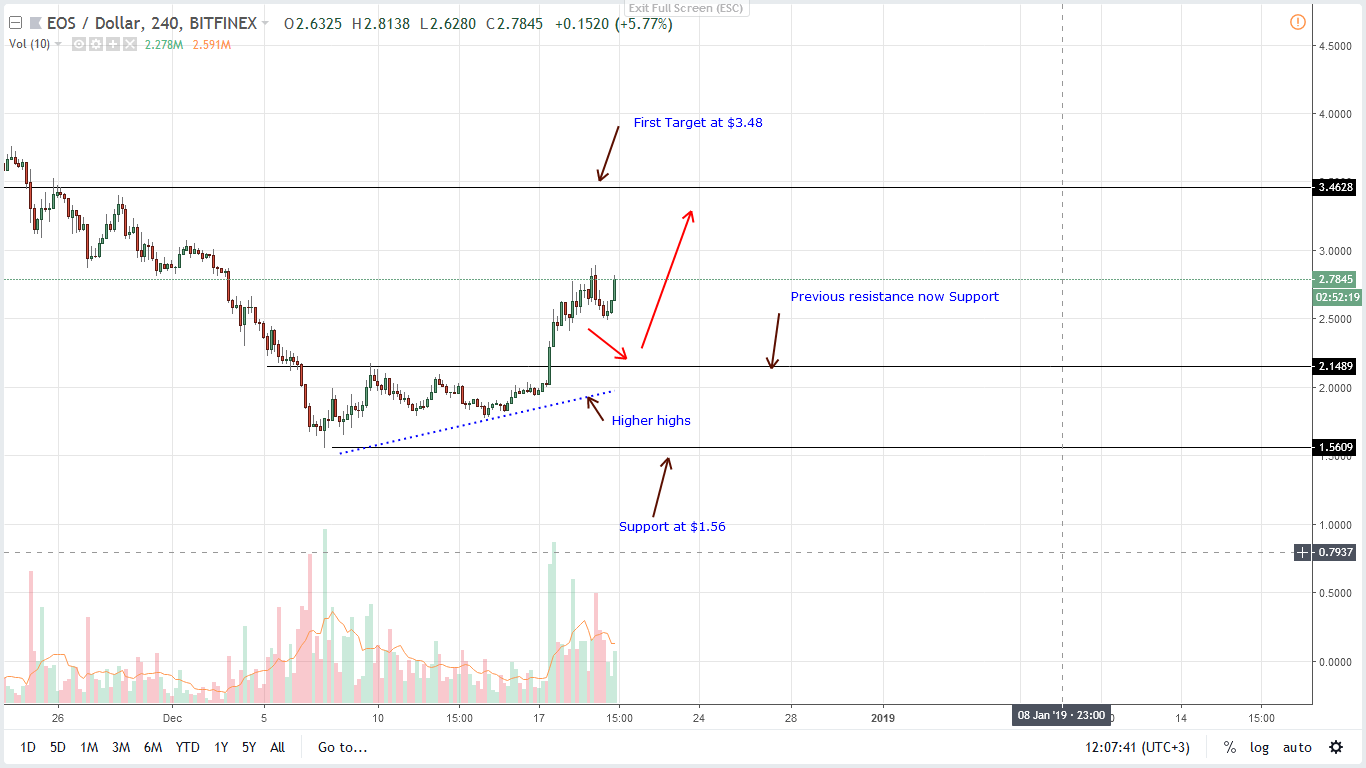 Like TRX, EOS is rapidly expanding and up 27 percent in the last week. After slowing down yesterday, it is up 3.5 percent at the time of press. Thing is, as long as EOS trade above $2.47 or Dec 19 lows, bulls have a chance. From candlestick arrangement, the best approach is for traders to wait for a decisive thrust above Dec 19 high of $2.87.

Thereafter they can trade a breakout with first target at $3.48 as laid out in previous EOS/USD trade plan. If not and there is retracement below $2.47, it is likely that EOS will re-test $2.15 at the back of light volumes completing a retest.

However, should EOS prices inch higher, our EOS/USD trade plan will be as follows: