Carl Icahn – Tycoon billionaire investor, added his idea of bitcoin as to him “it seems like a bubble” during a new interview on CNBC.

However, if there are those enthusiasts that do take the investors understanding of BTC as to-be-warned, feel at ease, as Icahn stated that he did not do his analyzing homework on the crypto101:

Putting the lack of understanding aside, Icahn continued to connect the Bitcoin boom to one of the most famous bubbles – the Mississippi land bubble:

“If you read history books about all these bubbles, like in Mississippi — where John Law went around selling all this land in Mississippi that was sort of worthless and the French were going crazy giving him all this money. And then one night it all blew up … to me, this is what this is.” 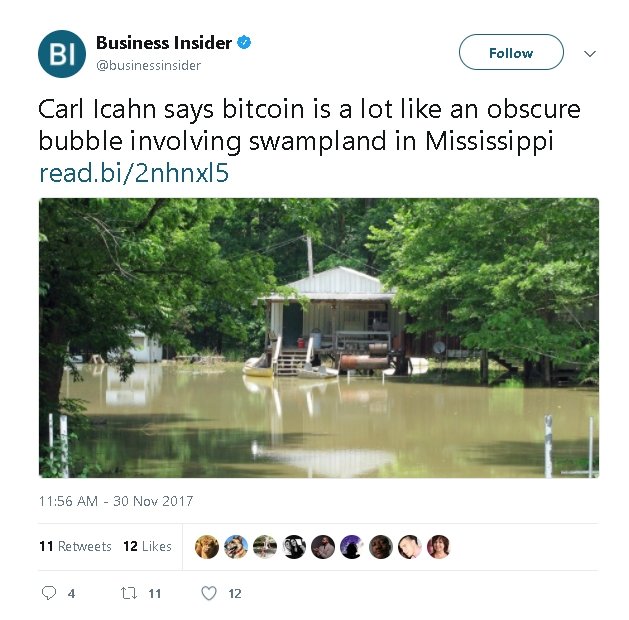 Obviously, there are many that disagree with the whole linking idea for Bitcoin with any speculative and famous bubbles that took place in the past. One of them is an economics professor: Malavika Nair [which story Ethereum World News did cover before] who counters the complete bubble idea.

Counter-replying the major figures that have a very bearish thought on BTC future and see it as just a catastrophic bubble, Malavika Nair – Troy University Prof, of Economics, shared his suggestion that Bitcoin in a fundamental level is not like the past bubbles which it is being compared.

That’s because Nair notes the speculative bubbles of yesteryear — like Icahn’s reference to the Mississippi land bubble, for example — have burst at their peaks, like a firework explosion

Bitcoin, on the other hand, has had one peak after another and has routinely come out stronger after price retracements. That’s certainly not how a firework explodes, is it?

From this stand point, we might conclude that traditional understanding of the ongoing processes will not be able to elaborate the crypto-era.