Bitcoin’s sideways price movements for the past few days finally gave way to a significant drop on June 10, 2018. The number one cryptocurrency based on market capitalization lost about $1,000 in value in 24 hours. It was generally a bad day for the cryptocurrency markets as many prominent coins dipped significantly. 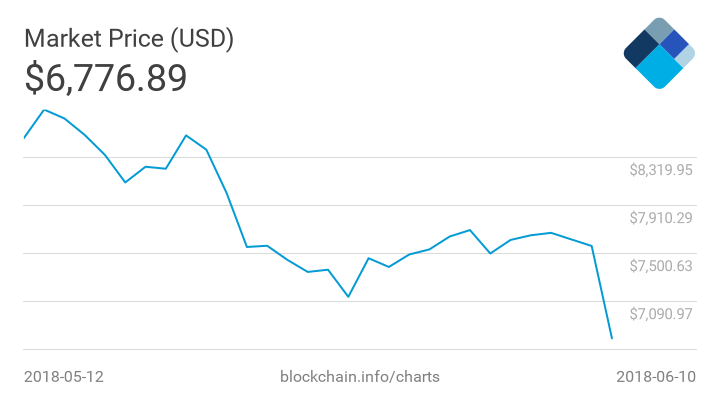 Other top 10 coins also recorded significant price slides. In fact, no coin in the top 100 according to CoinMarketCap recorded gains over the last 24 hours. For the major top 10 cryptocurrencies, EOS and TRON recorded the most losses with the former shedding more than 15 percent of its value and the latter, 13 percent. Litecoin is in danger of dropping below $100 which would be its lowest price level in six months. Bitcoin Cash has slipped below the $1,000 mark while Ripple and Ethereum have also suffered massive losses as well.

The price crash coincided with the Coinrail incident, throwing up the possibility that the hack had something to do with the price decline. Coinrail, a South Korean cryptocurrency exchange platform suffered a cyber incursion with over $40 million in cryptocurrency stolen from its coffers. The platform has since released a statement that all stolen tokens had been frozen and that its digital currency holdings were safely sequestered in offline wallets.

According to information made available so far, the Coinrail hack didn’t involve any of the major coin species. Thus, it is difficult to see how the attack would have a detrimental effect on the prices of the top cryptos. Furthermore, the platform itself isn’t one of the major cryptocurrency exchange services in the world. Thus, it seems like a stretch to imagine that a hack on a relatively obscure platform would cause such a tailspin in the market. However, it is important to note that the crypto ecosystem is prone to wild and sudden reactions to such news developments.

There is also a school of thought that believes there is an ongoing BTC price manipulation. To this effect, the U.S. Department of Justice in collaboration with the CFTC has begun investigating prominent stakeholders in the market. On June 8, 2018, reports emerged that the U.S. government was investigating four major cryptocurrency exchange platforms – itBit, Kraken, Coinbase, and Bitstamp, on suspicions of manipulating Bitcoin prices.

If history is anything to go by, massive selloffs will continue over the next few days as the bear run continues. All eyes will be on the market now to see how the trend develops – more decline or a price bounce.

How low do you expect the price of BTC to fall? Do you share the price manipulation allegations? Keep the conversation going in the comment section below.

Image courtesy of Shutterstock and Blockchain.info.