Bitcoin continues its recent price rally, topping $4,000 on Thursday, December 20, 2018. The top-ranked cryptocurrency is up by more than eight percent over the last 24 hours in what is a sixth straight day of positive price movements.

Six in a Row for Bitcoin

The relief rally for Bitcoin is currently in its sixth day with Thursday’s surge second only to Monday’s price gain. A large one-hour green candle sees the top-ranked cryptocurrency breakthrough the $4,000 price barrier for the first time in more than two weeks. 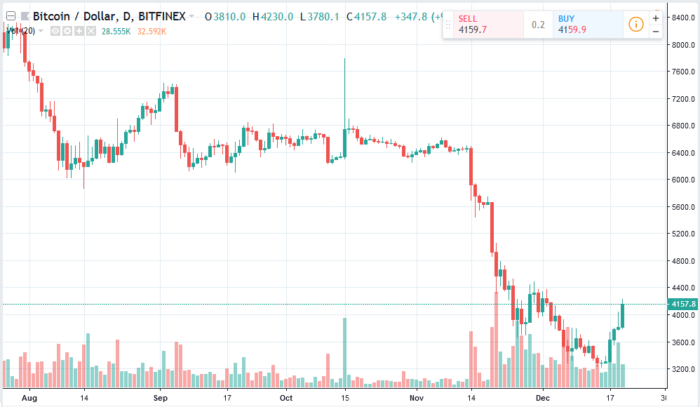 On Wednesday, Ethereum World News reported on BTC topping $3,800 and the possibility of a “Santa Claus rally.” BTC is currently up more than 15 percent from its 2018 low of $3,200. This figure is even the cryptocurrency’s lowest price level since September 2017.

The next question will undoubtedly be how long can BTC sustain the upward momentum. Since 2018, the cryptocurrency market as a whole has been in the wars of a prolonged bear market. In mid-November 2018, the price fell even further to levels not reached since 12 months prior.

Some analysts like Mati Greenspan, Senior Market Analyst at eToro believe the relief rally is due to traders liquidating short positions with the holiday season approaching. With many indicators showing BTC is the oversold position, it seems a trend reversal was inevitable.

Beyond this level, the $4,200 and $4,400 psychological levels could also prove critical. If BTC manages to resist rejection at these price marks, then the top-ranked cryptocurrency could make a run for the upper-$4,000 range.

Altcoins are also not left out in the upward price trajectory. Bitcoin Cash is again leading the charge for the top-ten cryptocurrencies. The fourth-ranked virtual currency is up by almost 40 percent in the last 24 hours.

Ethereum which recently regained three-digit price status is looking to add more gains in a quest to recover some of the massive losses posted in 2018. The third-ranked coin has added about $5 more from Wednesday to reach $110.