One year ago, amid the peak of 2017’s monumental cryptocurrency bubble, in which everyone and their dog were incessantly discussing Bitcoin, BlockTower Capital, a juggernaut in the crypto investment realm, made a ludicrous bet on the future value of BTC.

This, for those who aren’t in the loop, was the decision to create a $1 million options contract on LedgerX, a CFTC-regulated cryptocurrency platform, that would reportedly fork out $29 million to BlockTower if BTC hit $50,000 by 2018’s end. In other words, if BTC somehow manages to hold above $50,000 on December 28th, BlockTower will see a thirty-fold profit fly its way.

However, according to a recent report from Bloomberg, and as made clear by crypto’s tumult, BlockTower’s ante might not end well, especially as the vehicle’s expiry date rapidly approaches. In fact, for the $1 million options call to be saved from impending doom, BTC will need to rally by upwards of 1,400% in just three weeks, a near-impossibility for any asset, even in an industry as nascent, yet promising as cryptocurrencies and blockchain technologies. 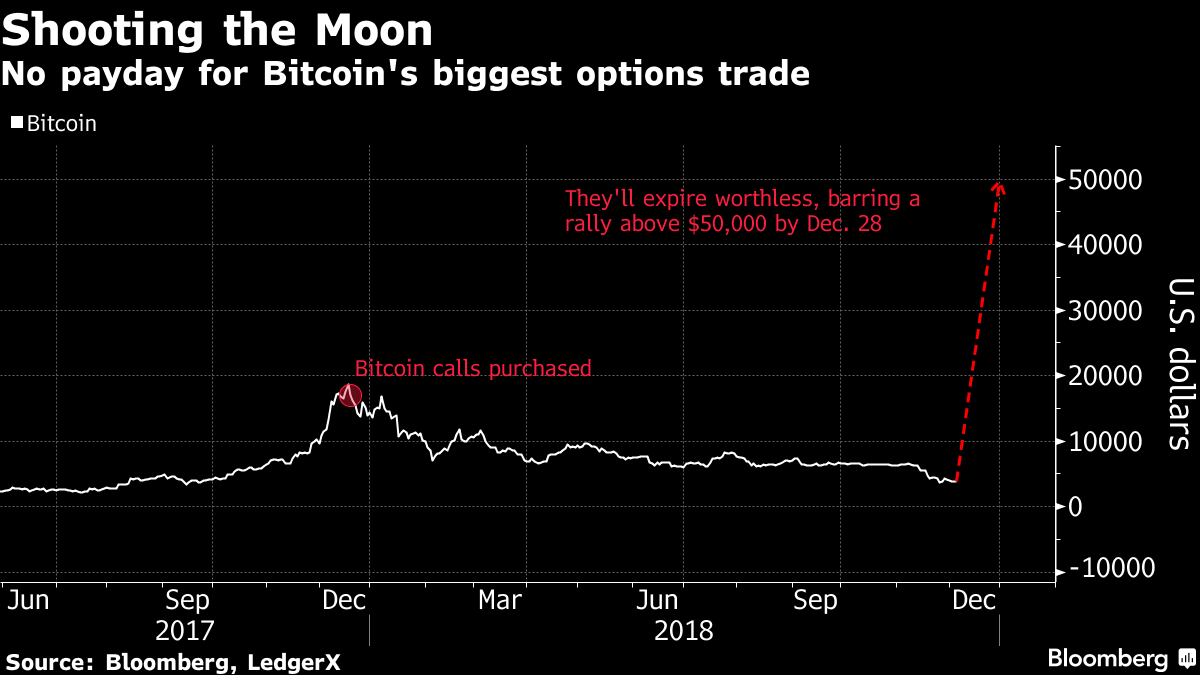 Still, Ari Paul, a managing partner at the America-based BlockTower, told CNBC in December 2017, just days after the creation of the bet, that he purchased the contract while liquidating his firm’s BTC stash. The former University of Chicago endowment manager then explained that the surprising call allowed BlockTower to secure profits, mitigate risk in a market drawdown, and have a potential to score big if BTC surpasses 50k, clearly accentuating the fact that if the options didn’t strike, he wouldn’t be (financially nor emotionally) devastated.

He echoed this sentiment in a tweetstorm made in late-September, in which he stated that “there’s no shame in losing trades,” before accentuating that risk management was a key factor in the creation of the $50,000/BTC by EOY 2018 options call.

Although BlockTower’s ambitious wager on the short-term fluctuation of Bitcoin’s value is likely to go awry in a few week’s time, the firm, or at least some of its representatives, are still undoubtedly bullish on crypto.

Speaking with CNBC’s Fast Money segment, Michael Bucella, a partner at the crypto-focused investment firm, did his best to break down the current state of the Bitcoin market, and what’s in its short to mid-term scopes.

Noting that crypto’s bear cycle isn’t as perilous as it seems, Bucella, a former executive at Goldman Sachs‘ Canada branch, drew attention to his theory regarding the interplay between “strong hands” and “weak hands,” the two overarching types of cryptocurrency investors. The BlockTower partner noted that while it would be accurate to assume that weak hands, also known as speculators, are liquidating their holdings to diehards (strong hands), the latter group isn’t rushing to on-ramp free capital.

He explained that crypto’s recent liquidity dry spell, along with market volatility, can be chalked up to the hesitance from strong hands to bulk-buy Bitcoin. Although this statement may seem bearish in and of itself, Bucella added that crypto’s near-year-long “distress cycle” is presumably coming to its culmination, echoing analysts’ cries that the bottom is almost in.

Bucella, while reluctant to forecast where the looming Bitcoin bottom will hit, added that when BTC finds a floor, whether it be at $2,000, $3,000 or otherwise, opportunities to scoop up the asset at low prices will be rather scant.

And in the end, the BlockTower partner explained that the “smartest money” continues to foray into this industry, whether it be the endowments of MIT, Harvard, Stanford, or the countless institutional players that have overtly expressed interest into purchasing cryptocurrencies. Keeping this thought process in mind, Bucella noted that even purchasing BTC at current prices could be a bargain bin deal, especially from a multi-year perspective.