Bitcoin has rallied above the $6,000 mark in the last few hours. This surge follows the previous price dip of a few hours ago. The top-ranked cryptocurrency had previously fallen to its lowest level in 2018. Despite the price struggles of BTC in June, its market dominance has increased steadily.

In a little over 12 hours since the price of Bitcoin fell below $6k, it has surged back above the $6,000. This latest movement might be indicative of the selloff saturation that experts like Kelly have been reiterating in the last few days. On the flip side, it may be a false positive – a minor surge before another significant dip which may see BTC bottom out at an even lower price level. 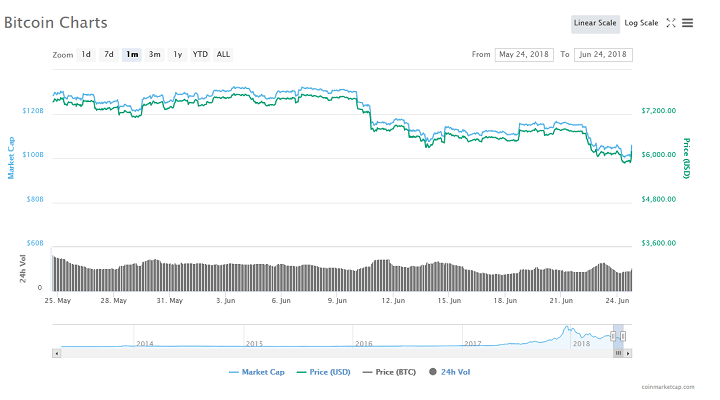 At the time of writing this article, Bitcoin was hovering around the $6,200 mark, falling slightly to $6,190. BTC is up by more than one percent in the last 24 hours. June has been a difficult month for the top-ranked cryptocurrency. Numerous sharp dips have eroded whatever gains were previously recorded. Thus, BTC has been unable to embark on any sustained bull run.

Bitcoin’s struggles mirror that of the general cryptocurrency market in many respects. Ethereum, Ripple, Bitcoin Cash, EOS, and Litecoin have all dropped considerably. Dash continues to have a miserable 2018, declining by more than 300 percent since the start of the year. There have also been two significant cryptocurrency exchange hacks – Coinrail and Bithumb. Both platforms are South Korean-based.

#bitcoin price is crashing but bitcoin dominance is up.

Despite the BTC price decline in June, Bitcoin’s dominance over the cryptocurrency market has steadily been on the increase. Presently, Bitcoin accounts for 42 percent of the total virtual currency market capitalization. This figure represents a two-month high – BTC hasn’t recorded more than 40 percent market dominance since April 19, 2018. 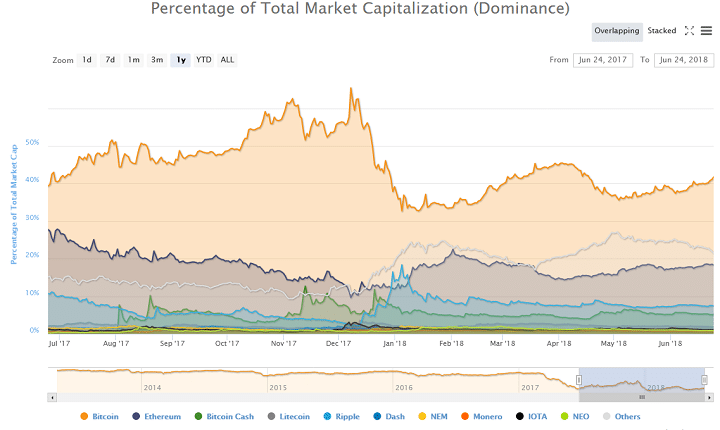 Many of the top ten cryptocurrencies seem to have declined more than Bitcoin in the last two months. Litecoin and Ripple are among two of the worst performing altcoins in the top ten bracket. If this trend continues, Bitcoin could break the 50 percent dominance barrier. The last time BTC held 50 percent market dominance was in mid-December 2017.

Bitcoin Has Abandoned its Fundamental Principles

Meanwhile, in a related, development, macroeconomist, Peter Tchir believes Bitcoin “has lost its way.” Writing for Forbes, the experienced trader and strategist said that Bitcoin seems to have lost sight of its core fundamentals. As a result, the adoption rate has plummeted, thus leading to the price struggles noticed in 2018.

According to Tchir, many of the factors that drove people to own Bitcoin in 2017 have either slowed down or have been eroded completely. Tchir believes that apart from being a store of value, BTC has failed to live up to its promise as an efficient medium of exchange and an anonymous way to store wealth.

However, Tchir asserted that BTC can recover its lost luster, saying:

BTC can regain some of its lost mojo, but I think Bitcoin in particular needs to assert its value proposition.  What it is worth over time, is a function of what value it provides its users and owners, and I for one, am struggling to see the benefits of re-entering the market.

Do you think this is the start of a sustained BTC rally or are there more price dips up ahead? How high do you think BTC’s dominance of the market will reach? Let us know your views in the comment section below.