We cannot reiterate the importance of an active community in blockchain projects. As long as a project is open source and its progress depends on participation, then it’s no doubt that Cardano is making huge strides. Cardano is a smart contracting and coin issuing platform, is pretty much centralized. However, work is in progress to bolster wallets and its settlement layer via Byron while latter phases will work towards complete decentralization.

Read: 2 Reasons Cardano (ADA) Could Be Listed on Coinbase Before Stellar (XLM)

Thanks to quality, the level of transparency and regular updates that the community receives, the community expects the latest update Cardano 1.4 for roll out later this month or early Dec. According to the latest AMA session by Charles, the update is under regression testing. Here, it’s all about functional consistency and already the team has picked out some regressions meaning bugs have been found but they are not of “big concern” and Cardano 1.4 should be released on time.

In the meantime–and has reported by Ethereum World News, the third coin under CoinBase exploratory list –ZEC is now available at CoinBase Pro. How and why ZCash was offered support ahead of XLM and Cardano (ADA) is not yet clear.

However, as it is, speculation has it that ADA shall be the next to experience the CoinBase effect, listing prices from 2018’s +90 percent losses.

With a $1.2 billion market cap, ADA is the 10th most valuable coin in the space. Regardless, just like the rest of the market, ADA/USD did face the brunt of sellers. At spot prices, the pair is down +90 percent from 2017 highs printing 11 percent in losses in the last week. And the worse thing about this is that though the market is vibrant expecting gains, candlestick arrangement points to sells. 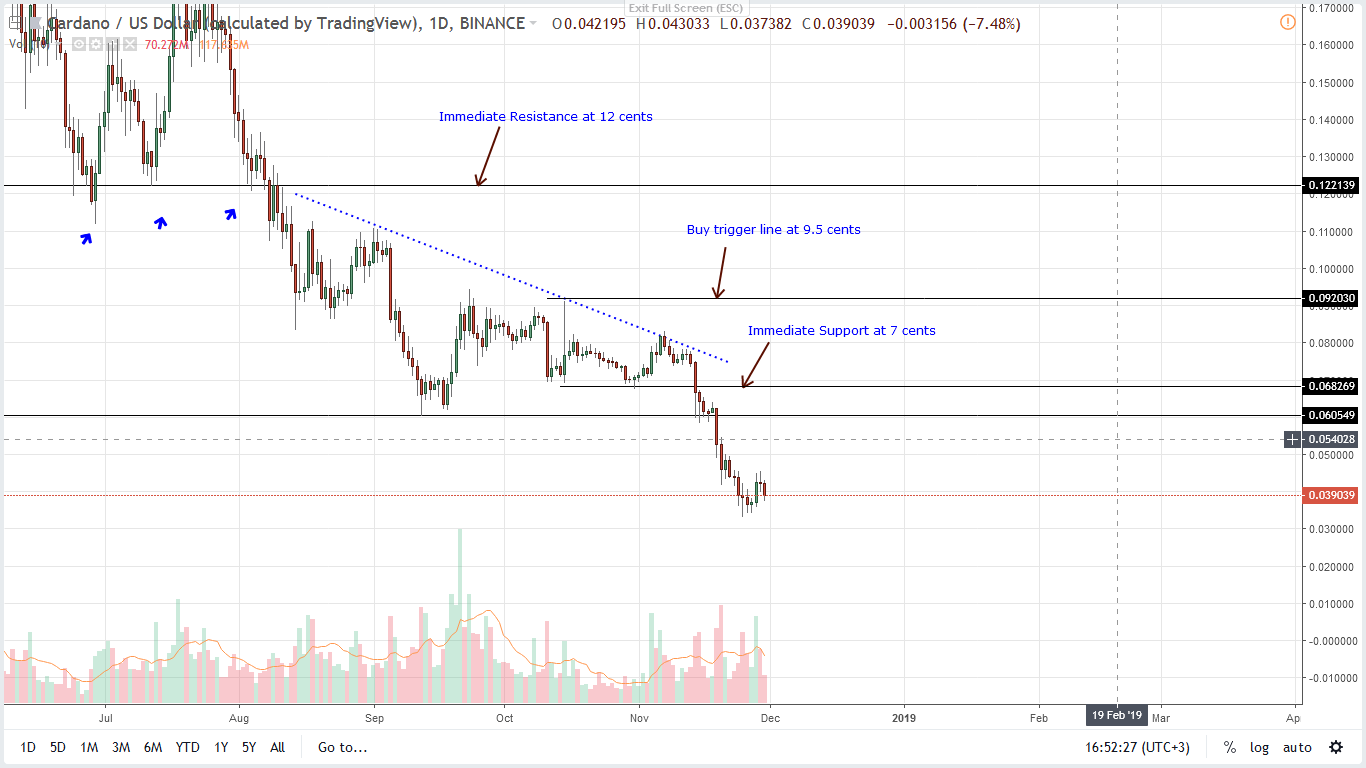 Needless to say, the drop in overall market cap—and prices has been frustrating and even depressing to investors. Despite shifting sentiment, ADA/USD is at this time frame bearish unless of course there are movements above important resistance levels.

In this time frame, there are four candlesticks that are perhaps important as far as price projections is concerned. First, the bear breakout bars of Nov 19 (189 million versus 107 million) and Nov 20 (246 million versus 126 million)—these two set the motions for the current bear trend which ADA/USD is currently trading in.

Thereafter, the rejection of lower lows by Nov 25 doji—179 million versus 119 million and the confirmation of bulls on Nov 28—218 million versus 140 million. Comparing these bars and we notice that there is better market participation on Nov 19-20 than on Nov 25—28 meaning bears are technically in control.

Unless otherwise there are strong upsurges above 6 cents, our immediate resistance and support which Nov 19-20 bear broke, then bears are in charge. If prices expand and fail to breach this ceiling, then we shall have a clear retest with a strong bear move cancelling bulls. Then again, if prices reverse Nov 28 bulls and instead ADA/USD sink below 3 cents, it is likely that we shall see further declines to new 2018 lows.