While the cryptocurrency market has been in a tumultuous state over the past 72 hours, Coinbase has pushed forward with its development, recently noting that Ethereum Classic is almost ready for addition to the platform’s exclusive roster of cryptocurrencies.

In mid-June, Ethereum World News reported that Coinbase had announced that the firm’s engineering team had begun to work on the integration of Ethereum Classic. At the time, the well-established cryptocurrency platform did not give a clear timeline on the integration of the crypto asset, seemingly going silent regarding news about the listing.

But with this most recent announcement, it is clear the engineering and coding team at the firm had their heads down, doing their utmost best to add ETC as soon as possible.

On Friday afternoon, Coinbase took to Twitter to break the latest update on this situation. They issued the following tweet to the account’s over one million followers, which sent shockwaves rippling throughout the industry.

Our engineering team is beginning final testing of Ethereum Classic on Coinbase products. We expect final testing to be completed by Tuesday, August 7, at which point we expect to announce that we’re ready to accept inbound transfers of ETC.https://t.co/l7smcSY3q8

In the blog post accompanying the tweet, the exchange revealed that they expect final testing to be completed by August 7th. Following the conclusion of the firm’s extensive rounds of testing, Coinbase will open support for inbound deposits on Coinbase Pro (formerly GDAX) and Coinbase Prime.

It is important to note that trading will not be enabled immediately, with the exchange intending to allocate 24 to 48 hours to explicitly facilitate ETC deposits. The firm’s Twitter account noted:

“We intend to allow 24-48 hours of inbound transfers before enabling trading of Ethereum Classic on @CoinbasePro and Prime.”

While the firm seems rather confident about this date, it was noted that it may be subject to change, with the date being seen as only a “best estimate,” rather than a finality. By any chance that details shift, Coinbase made it known that punctual updates would be given to the public to stay in-line with their transparency policy.

Coinbase also noted that its so-called “Consumer” exchange, the name given to the barebones exchange meant for ‘everyday joe’ retail investors, will not initially support ETC after August 7th. The cryptocurrency infrastructure firm wrote:

When the original ETC announcement hit, the cryptocurrency immediately saw a large uptick in volume, rapidly seeing a 25% increase. This positive price action continued, with the 15th largest cryptocurrency outperforming a majority of altcoins as this most recent announcement drew near.

As it stands, around two hours after this most set of news, Ethereum Classic has seen a staggering 12% gain and a near doubling in publicly reported volume. 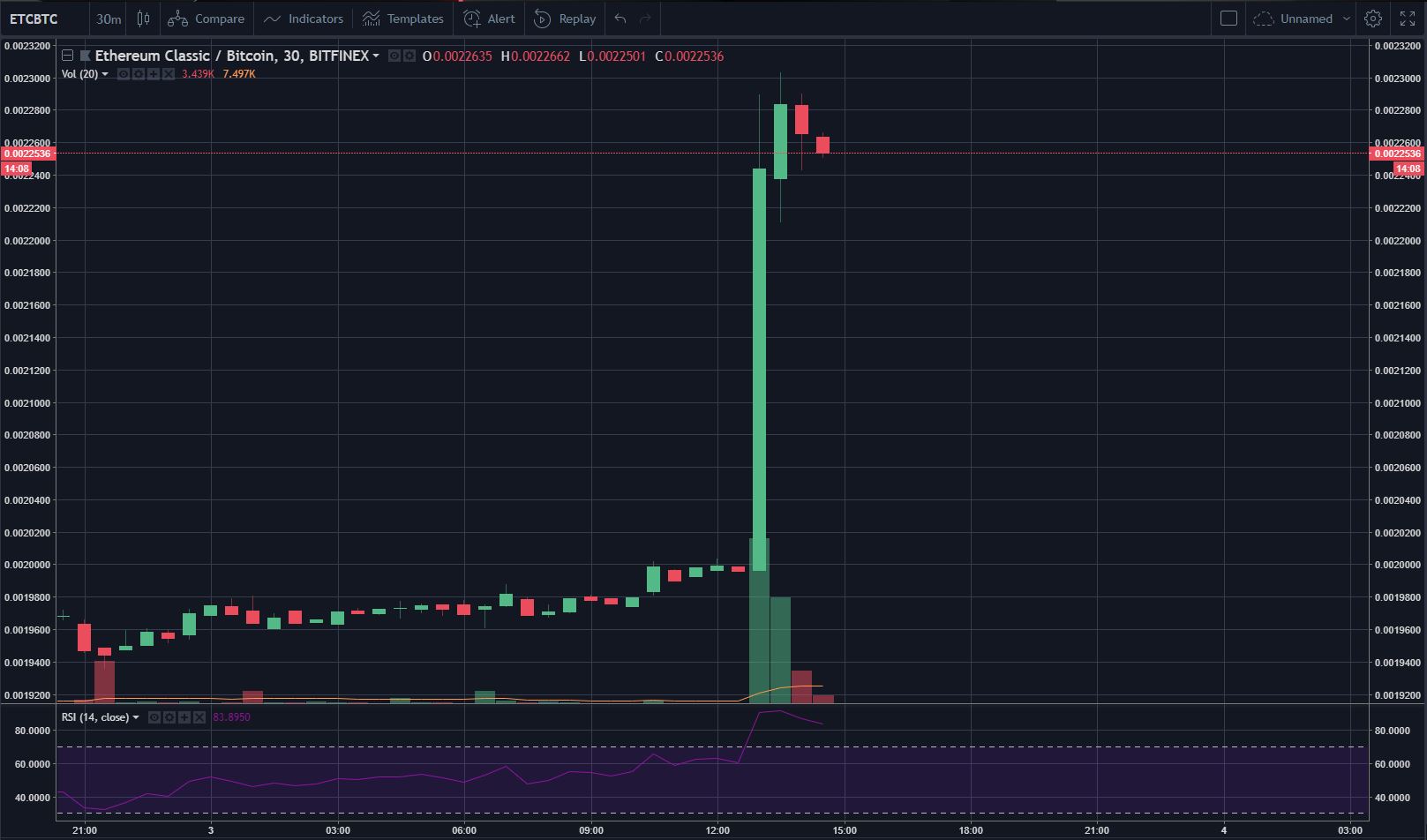 This increase was so substantial that CNBC Fast Money, who covers the cryptocurrency market nearly every day, issued a Tweet regarding the price action.

Check out Ethereum Classic soaring after @coinbase announced it will hit its platform on August 7 pic.twitter.com/bRVTsSXHtf

Considering the fact that a listing on Coinbase results in increased levels of adoption for a cryptocurrency, it only makes sense that ETC will continue to move upwards as we approach the final listing date.