January 15th this year marked the first time a crypto exchange had been hacked in 2019. The exchange that was affected was the New Zealand based Cryptopia. The exchange has since been on maintenance as the team at Cryptopia continues to assess the damage and losses made during the hack. They are also collaborating with New Zealand Authorities to bring the criminals to justice.

No Clear Figure of How Much Was Lost

Since then, many crypto enthusiasts and traders have been aware that the losses were in the millions but there was no exact figure to provide some clarity as to the extent of the financial damage caused.

A new report from the data company of Elementus has since provided a better picture as to what value in digital assets was taken from the exchange. The firm puts the estimate at $16 Million in Ethereum (ETH) and ERC20 tokens stolen from Cryptopia. The breakdown of losses from the hack has been provided by Elementus and can be found below.

How it Was Carried Out

The report by Elementus goes on to explain that this hack was unique in the sense that many different wallets were involved. The report explains:

The funds were taken from more than 76k different wallets, none of which were smart contracts. The thieves must have gained access to not one private key, but thousands of them.

According to Elementus’ investigations, the hack continued for several days after Cryptopia discovered the security breach.

After Cryptopia discovered the hack, they watched the funds continue to flow out of their wallets for four more days, seemingly powerless to stop it. As these wallets were not smart contracts, there should have been no technical complications preventing Cryptopia from securing the funds.

The only plausible explanation for Cryptopia’s inaction is that they no longer had access to their own wallets.

The crypto community managed to alert Binance CEO, Changpeng Zhao, on the presence of funds in the exchange that had been stolen from Cryptopia. The exchange soon froze those funds. The report by Elementus further breaks down the exchanges the hackers tried to use in liquidating their loot. 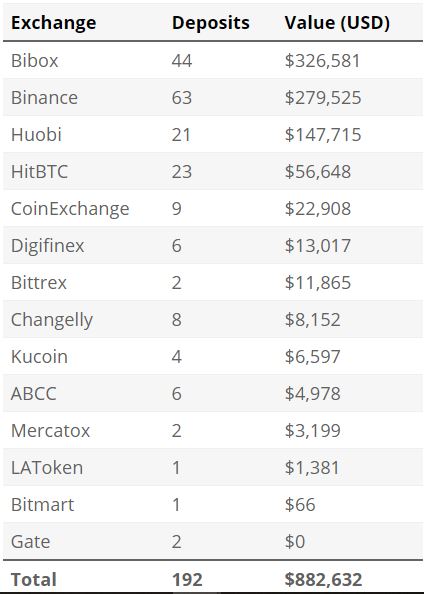 After their investigations into the Cryptopia hack, Elementus concluded the following.

What are your thoughts on the new figure of $16 Million stolen in ETH and ERC20 tokens during the Cryptopia hack earlier this month? Please let us know in the comment section below.