Reports have emerged that activities on the EOS blockchain have come to a standstill with frozen transactions network wide. This development is the latest in a growing list of technical issues that have affected the EOS blockchain. In a related event, ICON, another blockchain project also encountered a bug, this time in its smart contract code.

Bug Identified and Software Fix is in the Works.

According to a tweet by EOS, the development team was alerted to a bug which caused network-wide transaction freezing. As a result, the recently launched EOS mainnet has been paused. A few hours later, the development posted an update that the problem had been identified. Block.one, the creator of EOS is reportedly developing a software fix for the bug. Based on the details revealed so far, the problem was a bug in the code that controlled how deferred transactions were handled.

At 09:56 UTC (1 hour ago) we had an alert with transactions frozen on the EOS network globally. All the BPs are aware. We are all on a call with the other BPs to identify and resolve this issue. No timelines yet. #eosio #mainnet

At the moment, the 21 Block Producers (BP) on the blockchain mainnet have reportedly created a means to “unfreeze” the blockchain, in preparation for the bug fix. The expected upgrade to the EOS software which includes the patch will be tagged 1.0.5. Once released, the 21 BPs will carry out an update of their nodes, syncing with one another, after which, the EOS blockchain will be accessible to the public.

The news of the bug and the freezing of the blockchain has caused the price of EOS tokens to tumble by five percent. The token price at the time of writing this article is 410.38. 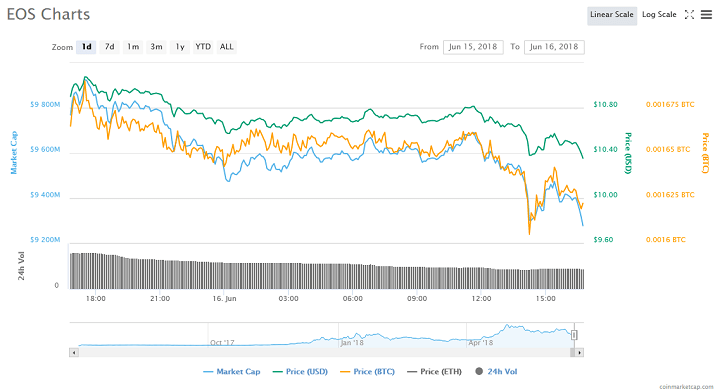 Another Technical Deficiency of the EOS Blockchain

Technical issues and bugs seem to be a recurring decimal in the grand scheme of things as far as the EOS blockchain is concerned. After a protracted mainnet launch saga, the EOS mainnet finally went live on June 14. Before the launch, there were reports of numerous defects with the code. One researcher even managed to earn about $120k in a week from identifying software bugs on the platform.

Apart from the bug problem, there were also concerns over the apparent centralized nature of the project. Many decried the fact that a limited number of nodes seem to hold all the aces with some even going as far as saying the project wasn’t decentralized. EOS is presently the highest earning ICO project, having raised $4 billion in its token sale. It is the fifth-ranked cryptocurrency according to CoinMarketCap.

Today appears to be a day for bugs in the blockchain world. Reports surfaced earlier in the day of a bug in the ICON smart contract which allowed anyone to disable token transfer transactions on the blockchain. The bug, an error in a modifier code fragmented was also identified in the YEED ICO project.

Is the latest setback another indication that there are severe problems with the project? Will this blockchain freeze adversely impact the credibility of the cryptocurrency? Keep the conversation going in the comment section below.