In what continues to be one of the most eventful sagas in blockchain history, EOS is set to abolish its controversial constitution. This move comes barely two weeks after the launch of its mainnet.

A Do-over of the EOS Constitution

In a Reddit post by “SonataSystems,” screenshots from the EOS telegram chat show excerpts of a conversation between Dan Larimer and Simon Case. Larimer is the chief technology officer (CTO) of EOS. The discussion can be viewed in the image below.

The proposed changes seem to address many of the burning issues concerning the constitution. The new framework will cover only major blockchain problems like the type the DAO suffered after the hack. This new constitution on the face of it strips power away from the 21 block producers (BPs) who have been accused of monopolizing control of the blockchain. It also significantly limits the oversight responsibility of arbiters like the EOS Core Arbitration Board.

Critics have derided EOS for its apparent lack of decentralization with BPs holding far too much power. Also, many have criticised the need for a constitution or any human form of governance on a blockchain. They argue that one of the fundamental philosophies of blockchain technology is governance by computer code – which unlike humans, is always impartial.

The reaction to the proposed changes has been split between support and those who believe that the plan is yet another failure waiting to happen. A Redditor with the username “jjordan” remarked:

This is good news. The current interim constitution is far too long and leaves far too much open for (mis)interpretation. Short and sweet, if anything at all, is all the constitution we need, [sic] IMO.

Conversely, another Redditor with username “ifisch” expressed doubts about the plan, saying:

This won’t change anything. Block producers can still do whatever they want, and they’re the only ones bothering to vote anyway (with enough power to matter). The entire constitution concept is flawed and pointless.

In a recent development, China released an updated blockchain ranking which put EOS right at the top, edging out Ethereum. According to the Chinese government, EOS excels in both technology and innovation. However, the blockchain didn’t score so well in the applicability metric. The previous blockchain ranking by China saw Ethereum in the number one position. 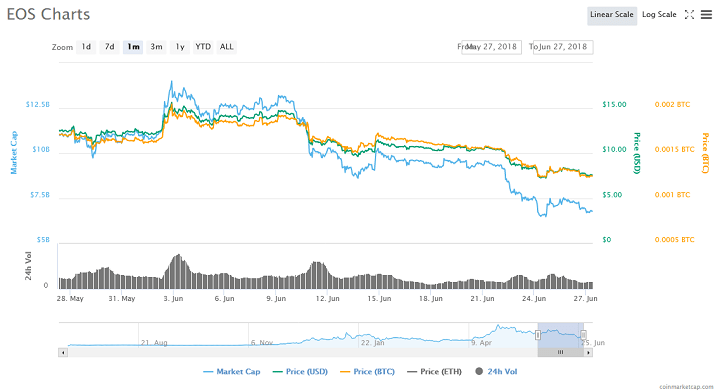 Regarding price movement, EOS is currently having a wretched June, down by about 50 percent from its month high of $15. The price has declined by almost seven percent within the last trading day. The much-touted project has suffered several setbacks stretching back to the pre-mainnet launch period. Recently, both the 21 BPs and the ECAF issued several freezing orders on accounts suspected of being involved in phishing scams during the mainnet launch.

Do you support the plan to amend the EOS constitution? What are your opinions on the presence of a constitution as part of blockchain governance? Keep the conversation going in the comment section below.