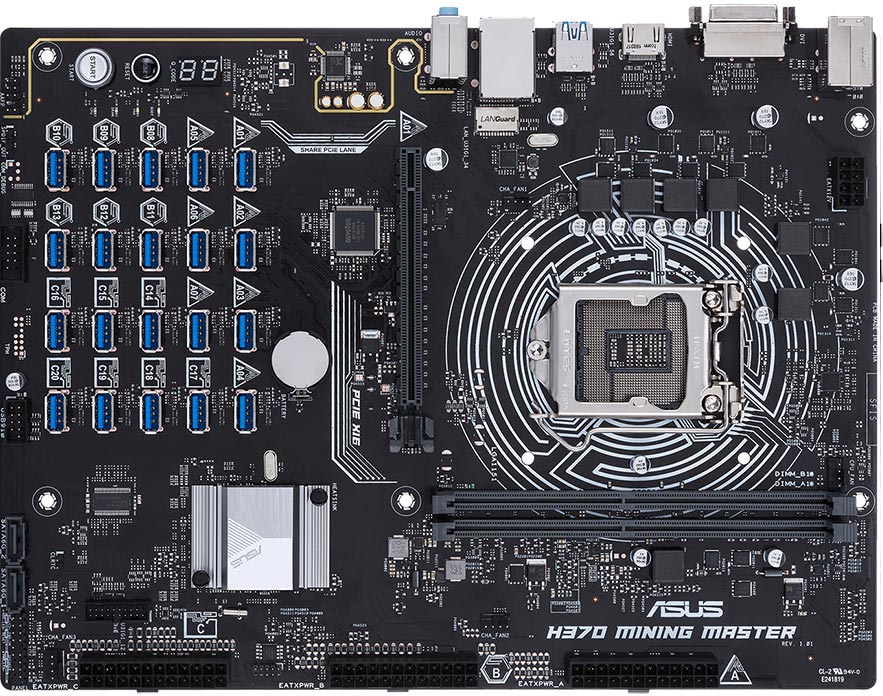 Asus has announced THE motherboard for GPU miners around the world: The new H370 Mining Master, which can handle up to 20 GPUs.

The world of mining has always been marked by the imperative need to measure the cost/benefit ratio millimetrically. However, with the boom in cryptocurrencies during the year 2017, this activity also increased exponentially.

Such was the success of crypto mining that the business became key to the revenue of major manufacturers such as ASUS, AMD, and NVIDIA.

The depletion of GPU stock eventually led to recognizing mining as a serious market opportunity, despite the indifferent opinions expressed by some representatives.

It was not only the gaming industry that was affected, but many other projects such as SETI also had to call for consciousness in order to continue to exist. Mining nearly ended the search for extraterrestrial life.

ASUS is one of the leading manufacturers of computer hardware. Their motherboards and high-performance equipment are very popular among technophiles.

The use of mining rigs has been extremely popular due to the importance that Ethereum has had in the sphere of cryptocurrencies.

A mining rig is a piece of equipment that puts multiple GPUs to work simultaneously and exclusively, achieving excellent hash power.

However, traditional motherboards have support for up to 4 GPUs, while some more popular motherboards among miners support between 6 and 8 GPUs.

That is when ASUS tried to make a difference in 2017 with the ASUS B250 Mining Expert. A motherboard with 19 PCIe slots, beating any other competitor.

However, at that time it was difficult to adopt as the GPUs manufacturers only allowed a connection of 8 cards.This meant that miners were initially only able to have 16 cards of which 8 were NVIDIA and 8 AMD.

In the middle of 2018, the new H370 Mining Master represents an evolution over the previous model, with a lot of new features that can make it the dream of all miners:

The first thing that stands out is the support for 20 GPUs. Now users will have every single slot inmediatly available.

Supporting such a large amount of GPUs means significant savings by not having to purchase additional motherboards for the same job.

Also, each motherboard requires its own PSU, RAM, and CPU. For this reason, the H370 Mining Master can save thousands of dollars for hardcore miners.

Another of the critical points of this new motherboard is the possibility of efficiently diagnosing errors using software designed specifically for this purpose.

Other key features of the H370 Mining Master are the support up to 3 PSUs individually, the replacement of x1 slots by vertical PCIe-over-USB to avoid riser failure, and HDMI + DVI support for dual screen monitoring if needed.

The H370 Mining Master will be available to the public on Q3 2018 those attending the Computex 2018 Conference in Taipei at the ASUS booth, #M410 in Nangang Hall, from June 5-9 will be able to test it sonner