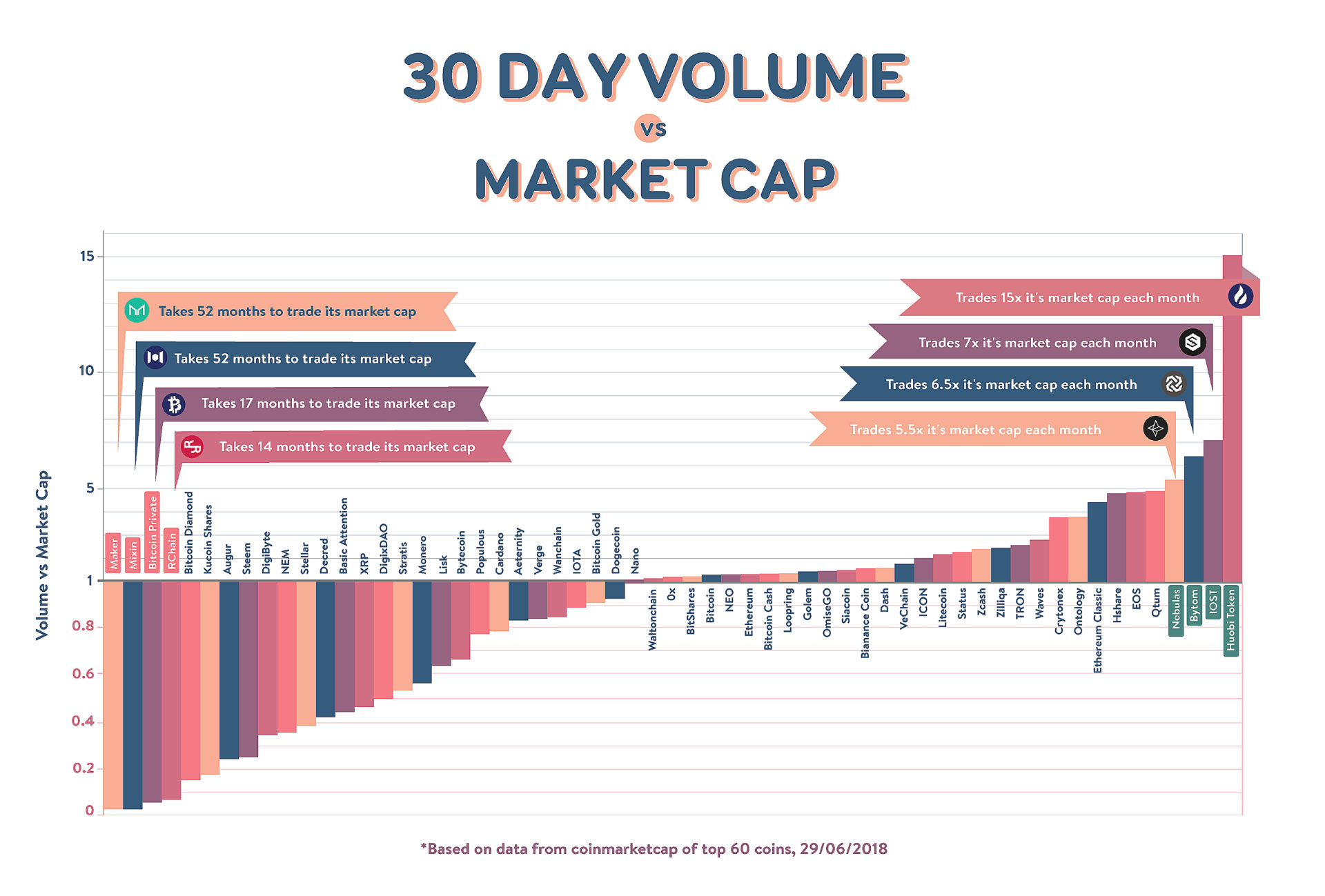 Ranking cryptocurrencies based on their market capitalization does not do justice to the popular coins that are moving huge volumes per day through trading. Market cap is simply a product of the circulating supply of a coin and its current value. This means that a lot of other statistical data is left out including a coin’s market liquidity. The latter is defined as the extent to which the crypto market, allows assets to be bought and sold at stable prices. This then brings us to the concept of trade volume.

With the assumption that trading volume acts as a proxy for market interest, we thought it would be an interesting exercise to test whether strong positive and negative outliers could be found when comparing a coin’s market capitalization with its 30-day trading volume.

The base hypothesis is that if a coin trades more of its market cap in volume, it’s a sign of a lively marketplace and high interest in the coin. Such markets allow for the quick purchase and sale of assets by individual firms without causing a drastic change in the asset’s price. However, if a coin’s trade volume is a small percentage of its market cap, it’s far more prone to intense fluctuation as there are often not enough buyers or sellers to cover major market moves. A better illustration of this can be found in the infographic below.

What this means for institutional investors is actually quite significant. Projects that trade at a low ratio to their market cap won’t be able to support high volume movements, as individual orders will have the ability to cause 10-20% price changes. This means whales will struggle to either buy or sell large amounts of low-volume coins at the prices they initially enter their trades with.

We found that several of the most established coins, such as Bitcoin (BTC) and Ethereum (ETH), traded at a volume similar to their market cap over the course of a month. This was expected. It shows relative stability and balance in interest from investors. However, there were significant differences when other coins with a lower market cap were explored.

Coins like IOST, Nebulas (NAS) and EOS have a considerably higher trade volume when compared to other top coins. IOST’s trading volume topped out at a whopping 7 times its market cap. (Note: We excluded Huobi Token (HT) as it is used to buy and sell other cryptocurrencies on the Huobi Exchange. This in turn could have skewed the data).

Conversely, coins like RChain (RHOC), Augur (REP) and NEM had extremely low liquidity. We found that it would take 14 months of trading to cover the equivalent of RChain’s market cap. Surprisingly, seemingly popular projects including Stellar and XRP came in on the low end of our research, which may point to an imbalance between the brand awareness and the actual interest in owning and trading the coins.

In conclusion, ranking cryptocurrencies using market capitalization does not entirely give a clear picture of what is being traded in the markets and its volume. A more inclusive approach would be to examine how long a digital asset takes to trade the equivalent of its market cap. This in turn would provide information as to what digital assets are more liquid than others. In the case of IOST, it has proven to be more liquid than the prominent cryptocurrencies of Bitcoin and Ethereum.