The crypto market has been damaging and with some folding up in the face of dropping asset prices, some as Tron are trudging towards accomplishing their initial vision–mission statements. In their bid to further decentralize the web and create this symbiotic relationship with developers, platform users and the foundation, the co-founder never tires from marketing the platform.

And as he continues to compare the performance of Tron with those of EOS and Ethereum, developers and projects are beginning to flock to Tron. It may be because Ethereum developers took long before agreeing on when to activate Constantinople and during that time developers were drawn to the $100,000 loan on offer by the Tron Foundation.

At the same time game developers couldn’t resist the Tron Accelerator and Arcade programs that seek to reward excellent contribution to the ecosystem.

Coincidentally—and as highlighted by Justin Sun, the launch of these two has seen transaction and addresses spike. As a matter of fact, two records were broken in the last two days.

To further pad the foundation, Sun is making proposals to the governing body for the reduction of energy costs from 20 SUN to 10 SUN. If it gets 2/3 support from the team, the cost of smart contracts will drastically reduce. This in turn will be more attractive for developers.

I have submitted Proposal 9 to reduce #TRON energy cost from 20 sun to 10 sun, which will dramatically decrease the cost of smart contract and creat a developer friendly environment. Please vote for Proposal 9! #TRX $TRX https://t.co/SaIfXXjDbr

Amid immense sell pressure, TRX is the top performer in the top 15 adding three percent in the last week. Even though TRX is yet to break into the top 10, favorable candlestick formation and prospects of higher highs could see TRX expand towards 1.5 cents dislodging ADA from 10th. 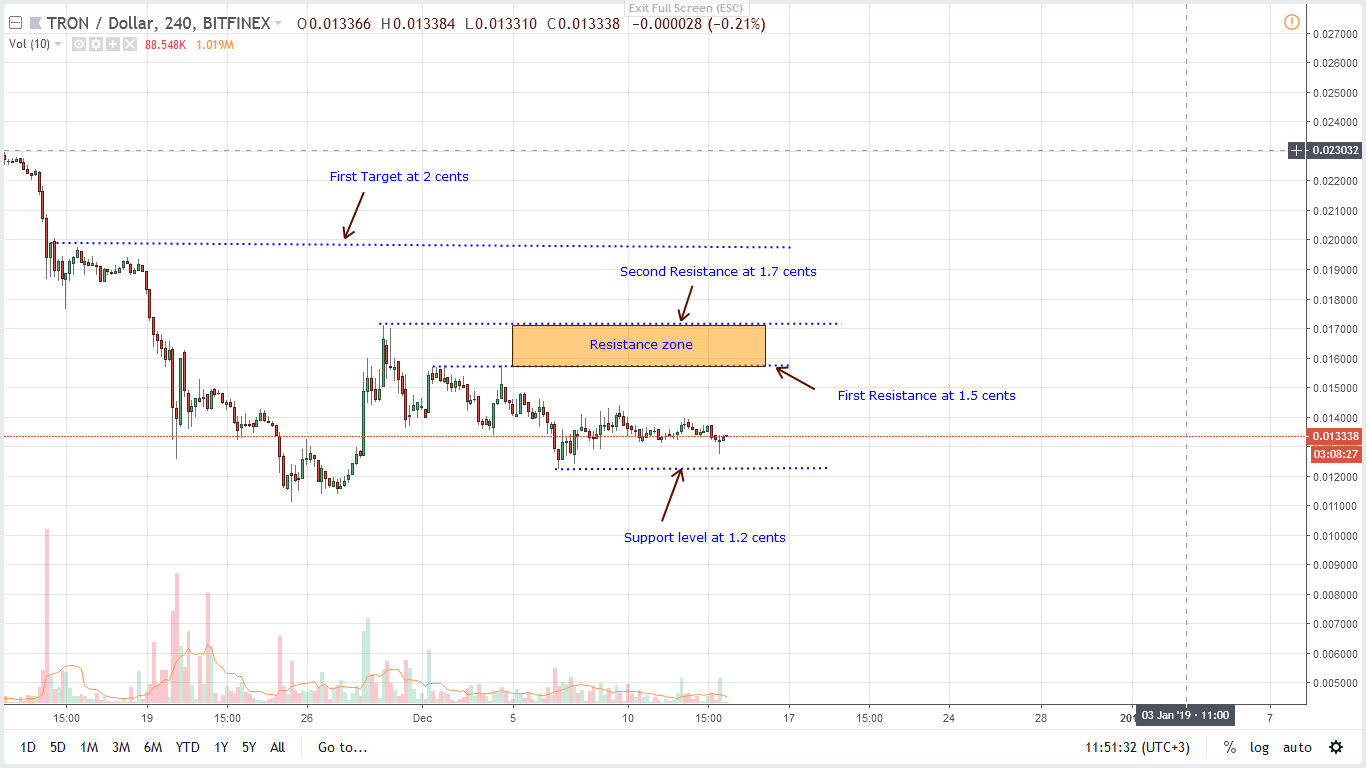 If anything, sell momentum has been wearing off in the last few days. TRX/USD is now confined within a 0.5 cents range. With clear caps and support at 1.5–1.7 cents on the upside and 1 cent on the lower edge, bulls will only be in charge if and only if there are strong rallies above our trade triggers. For now, we shall assume this is distribution since sellers have an upper hand and the path of least resistance—like other assets– is southwards.

Anchoring our bullish stand is that encouraging surge of Nov 28. Then, behind the sharp upturn were high trade volumes—12 million verses 4 million. But volumes have since tapered off and we cannot compare volumes of Dec 12, 1100HRs bull bar—4 million versus 1 million or Dec 14, 0300 HRs bull pin bar—4.1 million versus 1.3 million with those of Nov 28.

These recent bars define our trade range because if prices edge past Dec 12 highs of around 1.4 cents, the first wave of buyers should load up aiming at 1.5 cents, 2 cents and later 3 cents.

Depending on breakout direction, this ranging market could either turn out to be an accumulation or distribution. Should bulls build on Dec 14 pin bar and print above 1.4 cents today or over the weekend, we might see TRX/USD testing 1.5 cents by the end of the week boosting market cap. Otherwise, losses below 1.2 cents or Dec 7 lows would further shake out market participants.

In light of the above, our TRX/USD trade plan will be as follows:

This is no way Investment or Financial Advice. Do your own Research.