Bitcoin Cash Price Analysis: BCH/USD May Soar to $150 if Bulls Close above $115

As the year comes to a close, events around Bitcoin Cash will surely be a highlight. Straight from CSW—Roger Ver publicized differences to the very expensive hard fork that has seen the original Bitcoin Cash version value more than halved, it’s surely getting tough for traders and investors in general. Nonetheless, as a project that draws its value from public participation and use, differences in opinion was expected.

Read: Gaming Firm Wants to Pay Players to Mine Cryptocurrency

While SV promotes their new coin, Roger Ver and ABC are making advances with their Zero confirmation transactions. As the creators of the coin strive to make the platform a medium of exchange and a preferred coin for merchants and everyday users, the use of zero confirm transactions has drawn criticism because of security concerns.

Zero confirm transactions could be double spent and the Chris Pacia’s  Avalanche could be the solution that tame double spending and risk of Sybil attacks. All unconfirmed transactions would be protected by a group of 100 miners identified by those miners who mined the last 100 blocks. In the case of a double spend, these miners decide which transaction is valid without changing proof of work and orphaning any invalid block.

Generally, the trend is bearish and because of last week’s 29 percent drop, BCH is down to seventh with a market cap of $1.675 billion. From candlestick arrangement and trend, it is likely that BCH will find support after more than halving in the last month. If that comes to pass then we might see expansion above $100 and $115 in the next few days. 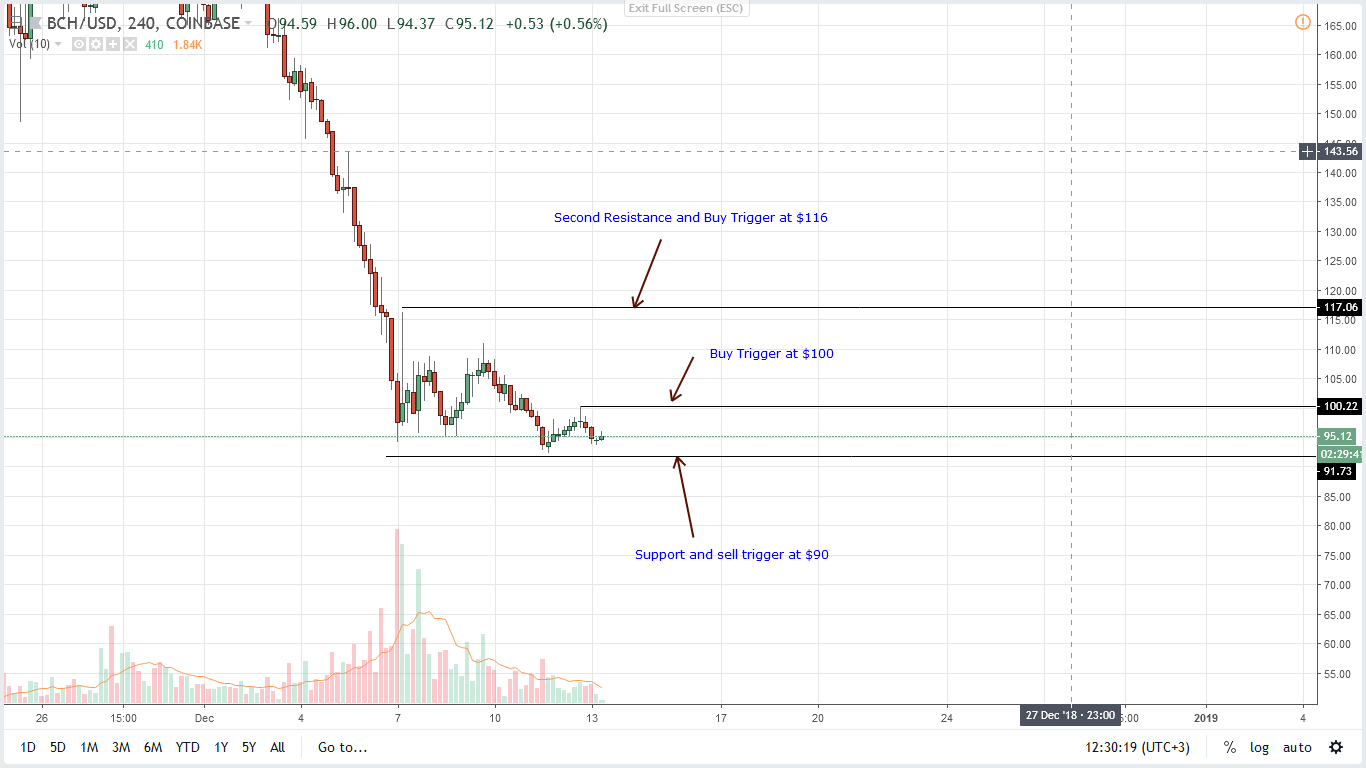 After four weeks of massive losses, BCH/USD is now ranging. Prices are oscillating within a tight $26 range with floors at $90 and caps at $116 or Dec 7 highs. Ideally, we would like to see prices expand above yesterday’s highs at $100 and rally above $116 as bulls kick-start reversal of last month’s losses.

Depending on your trading style, surges above $100 could trigger first lot of buying pressure with traders flocking in once there are solid gains above Dec 7 highs of $116. If not and prices sink below $90, then a BSV–BCH flip will be inevitable as bear trend continue.

On average, BCH related transactions is around 2.5k. That is why the events of Dec 7 which resulted in a bullish pin bar defines our price action. With 19k versus 9k on average volumes, the bar’s high-low defines our trading range. As we wait for a breakout below $90 or $100 and $115, these thrusts should be accompanied by high trading volumes and above average trade ranges.

As mentioned, the trend is bearish but after one month of steep losses, BCH/USD is now accumulating within a tight $26 range. For trend validation and continuation, then sellers need to quash bulls and break below $90. If not and there are expansions above $100 and most importantly $115, then it is highly likely that prices will test $150 by the end of the year.

Considering how candlesticks are laid out and sentiment around this coin, our BCH/USD trade plan will be as follows:

All charts Courtesy of Trading View.

This is not Investment Advice. Do you own Research.