Bitcoin is Not a Security, Says SEC Chairman

Chairman of the United States SEC, Jay Clayton says Bitcoin is absolutely not a security. He made these comments in an interview with CNBC’s Bob Pisani on June 6, 2018. The SEC chief also said ICOs are most likely securities but refused to comment on the regulatory status of specific Altcoins. 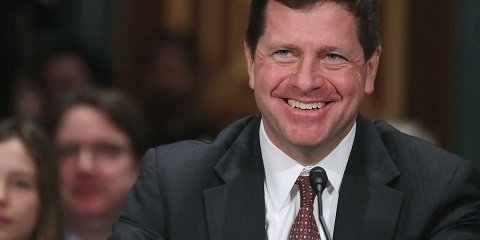 The proper classification for cryptocurrencies continues to be a prominent debate in the financial market. Industry commentators view virtual currency assets differently but the four major classifications offered are currency, utility, commodity, and security. Commenting on the debate, Clayton said that cryptos like Bitcoin are not securities. The SEC chairman described these assets as pure digital currencies used for facilitating transactions.

These are replacements for sovereign currencies [like] the dollar, yen, euro, etc. [This] type of cryptocurrency is not a security.

On the other hand, Clayton cryptocurrency tokens used issued during ICOs are securities. He established this notion saying:

The SEC chief went on to say that cryptocurrency startups who want to make a private sale of their tokens need to follow the private placement rules. Also, if crypto entrepreneurs wish to conduct an IPO using a token then they must file the necessary financial statements and disclosures with the SEC.

The SEC Will not Change its Rules

In response to a question about the SEC changing its rules to accommodate the digital currency market, the SEC boss said no such accommodations would be given. According to Clayton:

We’ve been doing this [regulating the asset market] for a long time. There is no need to change our fundamental approach.

The SEC chairman refused to comment on specific Altcoins concerning their status as currency or security. Instead, he insisted on the fact that the Commission would strictly follow the definition of what is a security. There is a lot of debate on the status of cryptos like Ether and XRP. Both Ethereum and Ripple have vehemently refuted the notion that their tokens are securities.

On the other side of the argument, many cryptocurrency proponents insist that their tokens are utilities; digital coins that provide access to a platform. Recently, a coalition of Silicon Valley crypto stakeholders led by Andreessen Horowitz has begun lobbying efforts in Washington to stop the SEC from classifying all ICO tokens as securities.

The Prospects of Bitcoin ETFs

During the interview, Clayton was also quizzed about the possibility of Bitcoin ETFs. Since the emergence of Bitcoin futures in December 2017, the focus has once again turned to Bitcoin ETFs and whether the SEC will allow it. In response, the SEC chief said:

We have been clear on what we need for any type of asset class if we are going to approve a product. One of those things is, is the pricing something people can rely on? Also, asset verification. Our communication to the marketplace on this has been very clear. I’m very pleased with my colleagues at the SEC because I think we’re very open about what we need for you to satisfy our rules.

Do you agree with the SEC chairman’s views? What Altcoins do you think are securities? Keep the conversation going in the comment section below.