In the midst of a mini Bitcoin revival, another technical indicator is promising a significant increase on the horizon. The top-ranked cryptocurrency has endured a difficult 2018 losing more than 60 percent of its value since the start of the year.

According to the Divergence Analysis (DVAN) Buying and Selling Pressure Indicator, BTC may be in for some positive price movements. DVAN tracks the price, trend line, and ideal exit points for tradable assets. It enables traders to to know when a commodity is overbought or oversold. 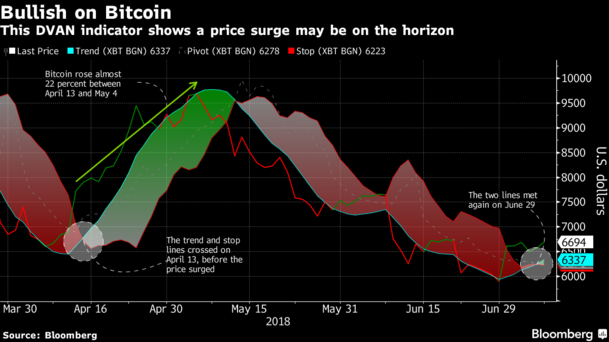 BTC has been on a steady decline since May 14 culminating in two sub $6,000 drops in June. Within that period, Bitcoin has plunged by 27 percent from $8,700 to $6,300. This period has been characterized by massive selloffs causing many experts to infer that Bitcoin may be oversold.

On Friday (July 6, 2018), the DVAN stop and trend for BTC intersected. When these two lines intersect, the price of Bitcoin usually undergoes a reversal in trajectory. Thus, if the pattern then BTC may be poised for a significant price leap, bringing an end to the long bear run period. The intersection of the two lines often indicates a supersaturation of asset sales which causes the trend to buckle, giving way for a price reversal.

June was an especially low period for the highest ranked cryptocurrency based on market capitalization. In mid-June, BTC shed $1,000 from its value in less than a day. It also set two new 2018 lows before experiencing a slight recovery that began at the end of June, all the way into the first few days of July.

A little over a week ago, another market indicator showed that Bitcoin was poised for a positive price run. The Williams Percentage R (WLPR) indicator revealed that BTC was massively oversold. According to the chart, Bitcoin was at the -80-marker meaning that it was oversold and an upward price bounce was on the horizon. Like the DVAN indicator, the WLPR indicator also has a history of accurately forecasting the price movement of BTC. 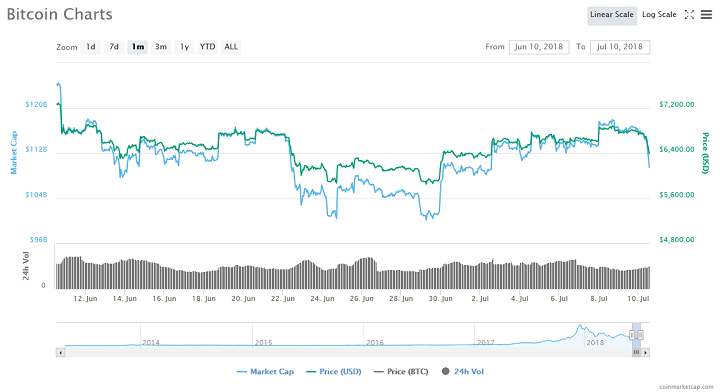 While these indicators show that BTC is oversold and a price surge is imminent, current market conditions still indicate selloffs are ongoing. Since the announcement of the Bancor hack, the cryptocurrency market has been losing most of the gains achieved in the last seven days. Currently, BTC is down by six percent as it looks in danger of slipping below $6,300.

What do you think about the DVAN indicator for Bitcoin? Do you think the latest Bancor hack will negate the predictions of the chart? Let us know your thoughts in the comment section below.

Image courtesy of Bloomberg and Coinmarketcap.