Bitcoin Will Go Up Again Based on This Technical Signal

It has been an eventful 2018 for the cryptocurrency market, and Bitcoin especially. The top-ranked cryptocurrency has declined steadily throughout the year dropping nearly 70 percent of its mid-December 2017 high of $19,500. In June 2018, BTC has had a tumultuous time of it, dipping and rising several times. The number one cryptocurrency even set a new 2018 low by dropping below $6,000 twice. However, despite these difficulties, it appears there is hope on the horizon for BTC bulls.

According to the Williams Percentage R (WLPR) indicator, Bitcoin might be set for a significant price reversal. The WLPR helps determine whether an asset is oversold or overbought. Presently, some experts believe the WLPR for BTC is showing an imminent reversal of the downtrend that characterized Bitcoin prices in 2018. 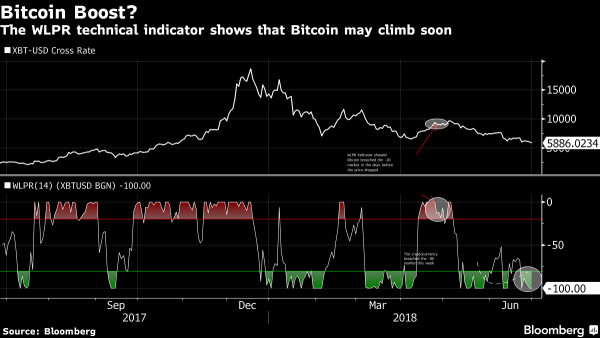 The WLPR chart currently shows Bitcoin at the -80 marker which indicates a supersaturation of the BTC sales market. Between -80 and -100 is the region is the region where analysts believe an asset is oversold. This region is also the best time to get into the market in preparation for the more than likely upward price bounce.

Since the start of the year, retail traders have been forced into massive selloffs of their BTC either by price manipulation or negative regulations. The incessant cryptocurrency exchange hacks have also not helped matters with investor confidence seemingly at an all-time low.

The WLPR chart has proven to be accurate in the past. In April 2018, the graph indicated that Bitcoin was in the overbought region. The next day, BTC price fell by four percent. Experts like Tom Lee, Brian Kelly, and even BitMEX CEO, Arthur Hayes believe that BTC will come on strong before the end of the year. There have been many price predictions that suggested growth upward, but none have managed to come true. The WLPR chart might be the exception. 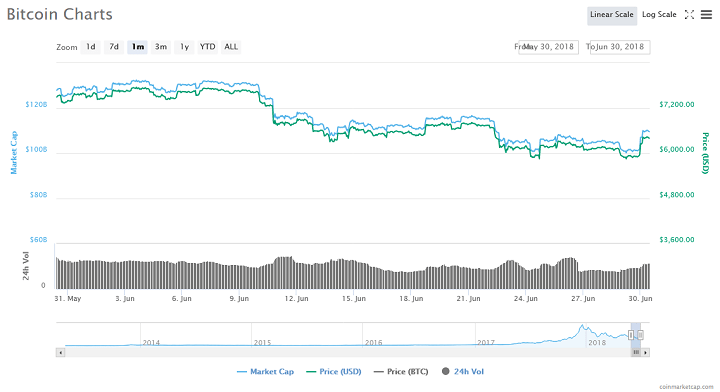 In mid-June, BTC dropped $1,000 in value to fall below $7,000. At the time, Bitcoin was trading at $6,700. The drop coincided with the Coinrail hack as well as the U.S. government investigation into suspected price manipulation activities. In a little over a week, Bithumb, another cryptocurrency exchange was hacked. BTC prices took another tumble in the aftermath of the attack.

With the over eight percent increase in the price of Bitcoin in the last 24 hours, BTC bulls will be hoping that this is the start of a sustained bullish trend.

Image courtesy of Bloomberg and CoinMarketCap.